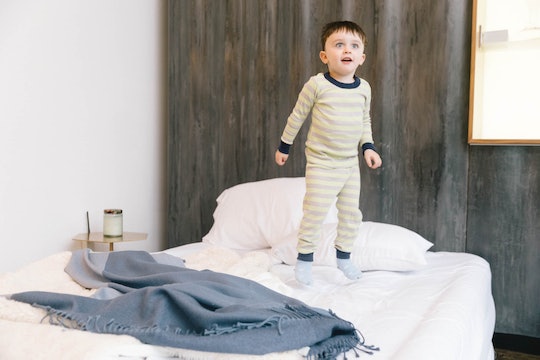 Your kids will always keep on your toes, especially when it comes to their sleep schedule. It seems like the minute you get comfortable with a daily routine, your child goes through a sleep regression that throws everything off track. As your toddler gets older, you’ll find them sleeping less throughout the day and eventually they’ll be down to just one nap. Figuring out your kid’s changing nap time routine can be hard, but just for reference, here are a few signs your toddler is ready for one nap instead of their usual two.

While early nap transitions can be easier to deal with, the later ones can be the most challenging explained The Baby Sleep Site. The transition from two naps to one, which usually occurs between ages 1 and 2, can be the most difficult, the website noted, because it can involve more toddler tantrums and sleep deprivation.

To deal with the woes of nap transitioning, Parents suggested making the change gradually. If you notice the signs that your toddler is ready to drop his nap count to one, you should begin by pushing your morning nap by 15 minutes each day until you get to one solid afternoon nap time. Parents also noted that because kids may have days where they are extra tired, you may still have to squeeze in an extra nap if they need it.

When your toddler begins dropping a nap, it might be a little confusing, but with time you will be able to readjust your daily routine. Just note that because each child is different, there is no exact way to tell when a sleep regression will hit or how long a nap transition will last. However, there are a few signs that could indicate your baby is dwindling their naps down to just one.