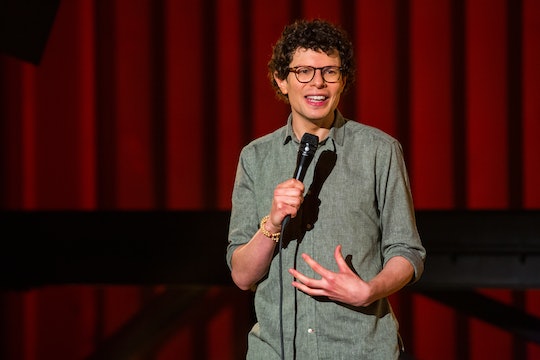 Simon Amstell questions humanity in his Netflix comedy special, Simon Amstell: Set Free, and he does it in a hilariously introspective way. The stand-up comic digs deep to examine his various relationships, love, coming out to his father, and his own ego. He’s a well-known comedian in the UK, but if you aren’t super familiar with him, you might want to take a look at Simon Amstell’s Instagram for more insight.

With the verified handle, @thisissimonamstell, the British comedian’s Instagram page is filled with promotional photographs of his various shows and movies, boasting his career as a comedian, writer, and director. His most recent posts are about his debut feature film, Benjamin, which was released in 2019. You’ll also find a few pictures of Amstell with the famous celebrities he's worked with, including like John Cameron Mitchell, Russell Brand, and rock star, James Righton.

But you’ll learn more about Amstell in his stand up act than you will through social media. In Simon Amstell: Set Free, he talks about how he struggled with his gay identity for years before coming out. “One of the major reasons I found intimacy so difficult is I had to pretend to be another person for about eight years,” he says halfway through the 50-minute set. “I never wanted to talk about this like it was a big deal, but think that maybe it’s dishonoring the 13-year-old who had to cope with liking boys and not being able to tell anyone. I was so terrified at 13 that I might like boys, I remember thinking that it was probably the fear of liking boys that was causing me to like boys. This made sense to me at the time.”

He went on to reveal he went to Paris at the age of 18 to explore his sexuality, and after having a few sexual envcounters, he knew he was gay. “So, you know, I’d confirmed what was obvious, and then all I had to do was spend the next few years trying to make my family feel comfortable, and that’s an exhausting task,” Amstell jokes. “Especially when all I could think was, ‘How could there still be any homophobia when Elton John wrote The Lion King?’ What does he have to do?”

When Amstell jokes about these vulnerable moments on stage, he takes you on his journey of self-reflection. In an interview with the Huffington Post UK, he explained it took him a long time to realize that pretending to be someone he wasn’t for so many years changed him in an existential way.

“As a way of transcending the label, or any label, I had acted as if it wasn’t a big deal, as if it hadn’t caused me to bend myself into something other than my authentic true self,” he said. “And, of course, it did. Of course, lying for that many years, constantly, and to everyone that you know and love, is going to cause you a lot of trouble. And I hadn’t acknowledged that. And then, when I did, it felt necessary to express some of that stuff in the show, because if I hadn’t, I’d have still been bending myself into something more acceptable.”

He told the outlet that he’s revealing his story in the special with the intention of entertaining the audience, but he doesn’t mind if it helps some people along the way. “I’m not actually motivated by trying to help anyone or make other people go to therapy,” Amstell . “My only aim is that people experience joy, and to be as funny as possible, by telling the truth. Anything else is a result that I’m fine with. And I’m really pleased with! But it would be a lie to say I’m motivated by healing the world.”

Amstell’s journey on Set Free is not just heartfelt and genuine, it’s cynical and funny too. After you peruse through his Instagram posts, you can head to Netflix to catch his revealing comedy special.

More Like This
'Wednesday' Creators Say They're "Talking Amongst Ourselves About Season 2
'Workin' Moms' Has An Official Release Date For Its Final Season
'Virgin River' Has Wrapped Filming Season 5 & OMG Is Charmaine Still Pregnant!?
Eric & Donna's Daughter Will Ruffle Red & Kitty's Feathers In 'That '90s Show'