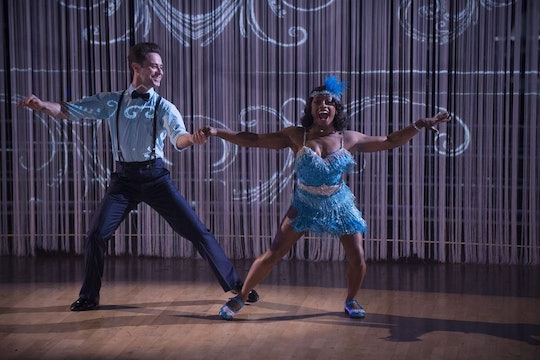 Simone Biles Stood Up For Herself On 'DWTS'

First, she smiled too much to convey enough emotion, and then she wasn't smiling enough at the judge's compliments, according to host Tom Bergeron. But Simone Biles' response to not smiling on Dancing With the Stars was the perfect way to react, since she was the only contestant to be singled out for that during Week 8 and overall this season. Bergeron probably didn't mean anything by his comment, but it's also hard to look ecstatic while you're not only being complimented, but judged too. And when you're the only woman being questioned for not smiling during the judges' comments on DWTS, it's really not cool.

When Bergeron interrupted the judges to ask Biles why she wasn't smiling after being given compliments, she replied, "Smiling doesn't win you gold medals," which was kind of the perfect clap back. Not that he was trying to insult her I'm sure, since the DWTS host is always pretty respectful and encouraging toward the contestants. But this was also the same night when Biles was first told that her smiling on the ballroom floor was too much and didn't give off enough real emotion. And then, after not smiling, she got another negative reaction, so it was only natural for her to give the response she did. But more importantly, why should she smile if she didn't feel like it?

Although the trio dance afforded Biles with a score of 36/40, judge Julianne Hough did say, "That was a very pretty dance... there wasn't necessarily something that wowed me," so Biles' reaction, after a night of highs and lows from the judges, wasn't the sweet face that she had been told earlier wasn't always necessary from her. And she had every right to say what she did. Carrie Ann Inaba's criticism of her in the trio dance was that she was almost too on the beat, though I'm trying to figure out how that's a bad thing.

There have been plenty of times this season when Bonner Bolton was scored in an unfavorable way and wasn't exactly beaming at the various compliments coming from the judges' table, yet no one asked him why he wasn't smiling, so why Biles? If Biles is expected to be smiling and cheerful at all times, that's completely unrealistic and if she's not in the mood to smile, then that's her prerogative. Women in general are constantly being told to smile more. And as I mentioned earlier, Bergeron's remark was undoubtedly meant as a harmless question, but would he have asked any of the male contestants the same thing? Probably not.

Suffice to say, Biles' response to not smiling on DWTS was entirely understandable and smiles or no smiles, she's a strong competitor this season, which is all that matters.