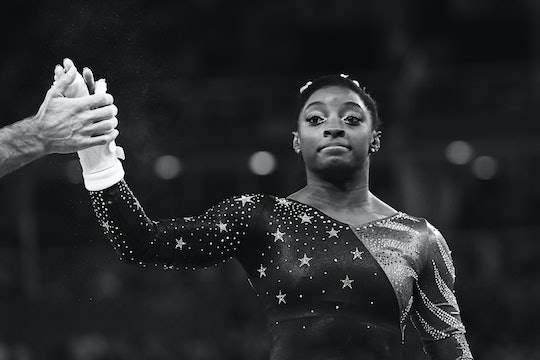 As the women's Olympic gymnastics competition wrapped up on Monday, the athletes finished up by showcasing their floor routines. Defending Olympic gold medalist Aly Raisman provided a flawless performance as far as her passes were concerned, which contrasted with teammate Simone Biles' impressive height and nearly perfect landings. An almost equally competitive showing by Great Britain's Amy Tinkler rendered this last day one of the most exciting. Everyone brought their A-game to the gym in efforts to secure a medal in this last opportunity. Ultimately, Simone Biles won the floor competition, closing the women's gymnastics competition with a bang.

Executing a move of her own making, called "the Biles," the gold medalist wowed with a "a double layout with a half-twist and a blind landing," wrapping it up with a stag leap—an extra variation added in for the all-around that was absent in the team competition. Her score of 15.966 eclipsed Raisman's 15.500 and Tinker's 14.933. There was some speculation that Raisman might earn the gold; her spotless landings indicated that she was a serious contender. Biles' 15.966, though, was nearly unreachable.

Tinkler definitely did her home country proud. As only the second ever British woman to win an individual medal in the sport, she appeared thrilled with her bronze-medaled outcome. Surely, out-scoring the Americans would have been the ultimate prize, but, at just 16 years old, this achievement assured that she'll be back to compete. Perhaps, even, she'll share an awards podium with Biles once again.

Biles took home her fourth gold medal of the competition and fifth medal of the Rio Games overall —a feat that no other U.S. gymnast has achieved thus far. She reigned supreme by scoring first place in vault, team all-around, individual all-around, and, of course floor, earning her bronze medal in balance beam on Sunday.

Many are already speculating about what this all means for Biles' olympic future. The 19-year-old has made incredible waves this round as the fifth-ever woman to earn four golds in one Olympic games. Fellow gold medalist Mary Lou Retton, who won the individual gold medal in the 1984 Los Angeles Olympics, told People that she truly believes Biles is "the greatest gymnast ever" and is "just the best gymnast [she's] ever seen in [her] life." In reflecting on the evolution of the games, Retton relays: "I say to myself every four years, 'This is it, we're at the limit. We can't do anything more difficult.' And then walks in Simone Biles and she just blows your mind."

Mind-blowing indeed. As sad as it is to see the competition come to a close, knowing that gymnastics has a sparkling future in store makes the goodbye a bit easier. Who knows—in 2020, Biles might have developed another self-titled move, shaking the games the same way she's done this time around.