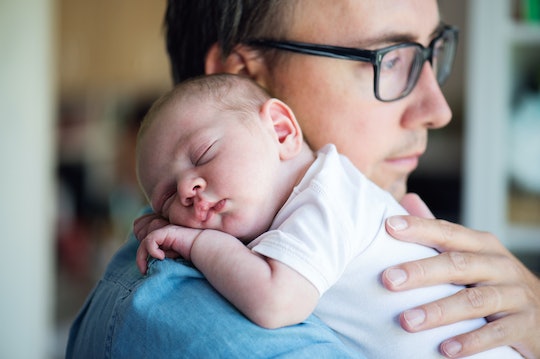 Single Dads Are More Likely To Die Early, & We Need To Do More To Stop It

Single parenthood is on the rise in the United States, according to census data. But when it comes to understanding the strain that single parenthood can have on health and mental health, we tend to focus on what happens to single moms. A new study from Canadian researchers points out why that focus is potentially harmful: the risk of premature death in single fathers is higher than that of single moms or of parents in a couple, according to new research. And because so little research has been done on the phenomenon of single fatherhood, the reason why single dads die sooner than other groups is largely a mystery, according to the study findings.

The study, which was published in the Lancet Public Health medical journal, followed 40,490 people who participated in the Canadian Community Health Survey. Researchers collected data from the sample group — which included 871 single fathers, 4,590 single mothers, 16,341 dads and 18,688 mothers with a spouse or partner — for 11 years, according to their report. The authors found that in the decade following the initial survey, the premature death risk and rate for single fathers was higher than that of any other group.

But what’s most alarming is that those damaging behaviors didn’t fully account for fathers’ increased risk. In fact, the Canadian researchers were unable to pinpoint exactly why single fathers were more likely to die than other kinds of parents, TIME reported. Even after adjusting for age, health, socio-demographic characteristics — and those high-risk lifestyle choices — the researchers found that single dads’ risk of death over the course of the study was still more than twice as high as other parents.

Part of the reason why single parenthood may be more detrimental for men is that we just don’t talk enough about ways to support single fathers, Oxford researchers Rachel Simpson and Sarah Floud wrote in an accompanying editorial for The Lancet. When it comes to single parenthood, talking about health and community resources usually means exploring more ways to support single mothers.

There’s a good reason for focusing on single motherhood: according to the Census Bureau, one in four children in the United States live in a home headed by a single mother, a percentage that has nearly tripled since the 1960s. But the number of single dads has also undergone a dramatic shift over that same period: In the United States, the number of single dad households has risen about ninefold since 1960. Today, some 2.5 million families are headed by single dads, according to the latest Census Bureau report. And while dads who parent solo are less likely to live in poverty than single moms are — single dads are more likely to be older, white, and have higher education and income than single mothers do, according to Pew Research Center — they still don’t do as well as married or partnered parents of either gender: 8.4 percent of related children in married families were in poverty in 2016, compared to 19.9 percent of related children in single-father families, according to another Census report.

But focusing on the rising reality of single motherhood in the United States has meant that the needs of single fathers have gone ignored, so much so that the dads themselves often don’t realize their added risk. Single dads surveyed for the study tended to claim that they had adequate ties to the community and sufficient medical care, MedPageToday reported.

That means the medical community will have to get better at recognizing when dads who parent solo are engaging in unhealthy behaviors, the authors wrote. And that the research community — not to mention the communities of parents everywhere — will have to expand its narrative on single parenting to include the unique, and often misunderstood, risks that dads face.

More Like This
A Parent’s Guide To Stomach Pain In Kids
Reddit Backs Mom Who Got Scolded By Teacher For Not Inviting 30 Kids To Birthday Party
Doctors Swallowed LEGOS To Prove Everything Is Awesome For Kids Who Do The Same
Does The FDA's Plan To Limit Lead In Baby Food Go Far Enough?
What Parents Are Talking About — Delivered Straight To Your Inbox