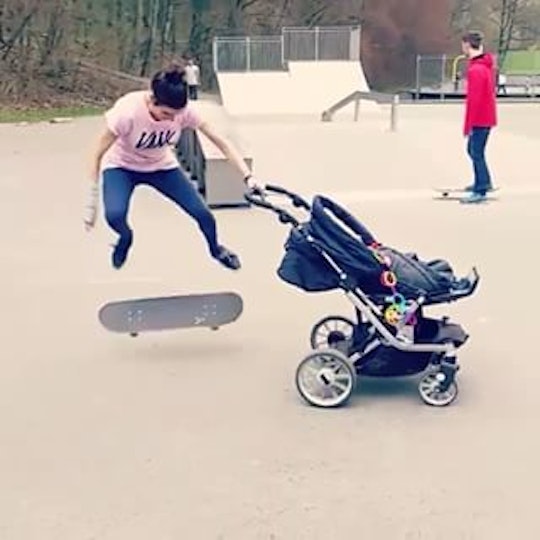 I’m sure we’ve all seen a hunky rebel skateboarder in checkered Vans with a backwards hat and were just mesmerized by their ability to shred (that’s skater lingo, right?). Well, this skateboarding mom with a stroller is putting everyone else in the skater community to shame. Rad German mom Maria Oberloher posted a video of herself the other day, effortlessly performing a kickflip while 8-month-old-baby Luan rolls in alongside in his stroller — and it's completely impressed the Internet.

Oberloher posted the video to her Instagram account on March 31 and it quickly went viral with thousands of shares, likes, and comments by viewers who were blown away by the general cuteness and Oberloher's skater skills. The video, captioned “Have fun with my Baby”, was large received positively, with most commenters impressed. Many found the video adorable. In addition to the hundreds of “awwws”, one viewer commented, “Family on wheels. Love it!”

However, not everyone was as enchanted by the cute vid. Some viewers claimed that Oberloher was putting the baby at risk and that it was dangerous. “Stop promoting this stupid act involving babies in push cars being pushed by the so called parents doing tricks,” an angry Facebook comment on Transworld Skate's official page (where Oberloher's video had been shared) read. “Every skater has heard and knows of the small stone that can end it all.”

Comments quickly flooded in assuring those concerned that the baby wasn’t at risk. “If you were a skater like she is, you’d understand that the baby was in no real danger there,” one Facebook comment read. “A simple trip to the grocery store in a car is trillion times more risk.”

Oberloher isn't alone in dealing with those types of public criticisms. In 2012, skateboarding legend Tony Hawk posted a video of himself skateboarding with his daughter, sparking similar criticism from viewers. In response, Hawk took to Instagram, posting a photo of the two on one of his boards, and cheekily captioning the image,

For those that say I endanger my child: It's more likely that you will fall while walking on the sidewalk than I will while skating with my daughter.

Of course, since then Hawk's daughter Riley has been spotted in her dad's home videos wearing a little helmut of her own. Point taken.

You can always count on the Internet to give us every angle and behind a computer screen people will say whatever they please about even the cutest of cute videos. Regardless, skater mom Oberloher seems to have mostly won over the internet with the ultimate in mom cuteness. Looks like when baby Luan is too big for that stroller, he’ll have to get his own set of wheels. At least we know he'll have the perfect teacher.