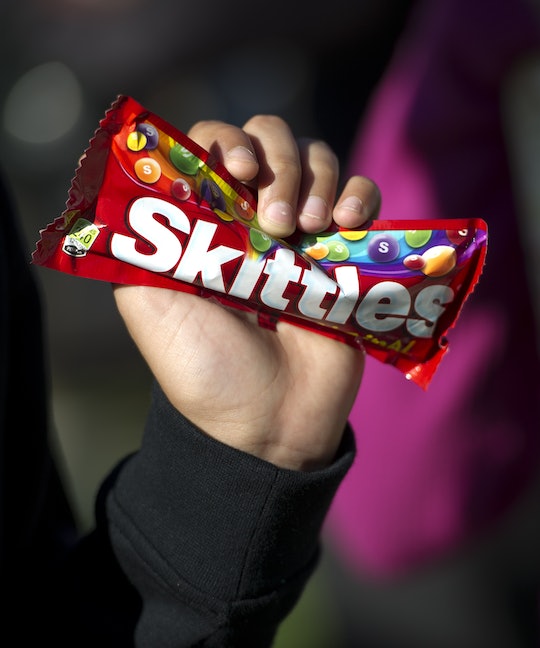 Donald Trump Jr. isn't exactly known for tact — not unlike his father. So when he tweeted an image of a bowl of Skittles, which included a disparaging, blanket statement about Syrian refugees, the candy hit back. Skittles responded to Trump Jr.'s anti-refugee tweet with a perfect takedown — and an important reminder about the plight of refugees.

On Monday, the son of the Republican presidential nominee tweeted an image of a bowl of Skittles with a quote that said, "If I had a bowl of skittles and I told you just three would kill you. [sic] Would you take a handful?" The image also included the Trump Pence 2016 official logo, implying that the campaign endorsed the image and its misleading message.

The image and quote is Trump Jr.'s take on something called the Poisonous M&M Fallacy. The logic problem suggests that if you have a group of people (be it men, people of a certain race) you can't know for sure which ones are "bad," so you have to assume that they all could be. This analogy has often been cited because of its "emotional appeal" but has also been heavily criticized, given that it doesn't account for statistical relevance, base rate neglect, and isn't a random sample.

That, and it supports racist behavior and viewpoints.

Skittles, owned by Wrigley, responded to the tweet with an official statement from the company's Vice President of Corporate Affairs Denise Young, according to NBC:

Skittles are candy. Refugees are people. We don't feel it's an appropriate analogy. We will respectfully refrain from further commentary as anything we say could be misinterpreted as marketing.

Twitter also responded in droves to Trump Jr.'s tweet, making it clear that, while some might agree with Trump's anti-refugee agenda, there are also many people worldwide who do not:

Many people tweeted a photo of Omran Daqneesh, who became a face of the Syrian refugee crisis last month after journalists caught a now-famous photo and video of him being removed from his home, bloodied and battered, after an air strike in Aleppo. Thousands have died there, including thousands of children, in the years that have passed since the country's civil war began five years ago.

This is not the first time that Trump, or a member of his campaign, has tweeted or retweeted racist remarks. The Donald himself has been tweeting for years about the "birther" movement, claiming that President Obama isn't a U.S. citizen — something that's come up again and again in the current presidential race.

Earlier this year he made headlines for continuously refusing to disavow members of the Ku Klux Klan, and other white supremacists who support him — most notably David Duke.

He has also been vocal about his plan to ban Muslims from entering the U.S. if he's elected president. In the aftermath of an explosion in the Chelsea district of NYC over the weekend, Trump made hasty statements about terrorism without knowing the facts, and reaffirmed his belief in the value of racial profiling, according to The Telegraph:

"These are sick evil people that want to destroy this country," Mr Trump said, adding "we coddle them" and "are afraid to say anything, and to say what the problem is."

Twitter continues to respond to Trump Jr.'s tweets, reminding us that we are all people — and dehumanizing anyone, even for a moment, is breeding ground for continued racism and violence: