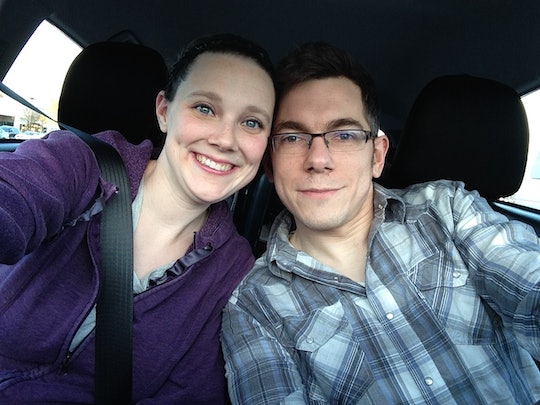 Sleep Sharing Hasn’t Hurt Our Sex Life, It's Just Made Us Much More Creative

I know what you’re thinking. I get horrified looks when I disclose that I sleep with my two kids and have since they were babies. I’m not just talking about those “but you might roll onto your baby and kill them” looks, I’m talking about the “but where do you do it?” looks. First of all, the sex my partner have or are not having really isn’t anyone’s business, but in the spirit of full-disclosure and of my inability to label anything as TMI, I’ll still tell you about it. Sleep sharing hasn't hurt our sex life, but it has made us way more adventurous.

We’ve never had a crib. Our babies have slept in bed with us until they were old enough to start the night in their own room. (And, yes, they just start the night there. I mean, sometimes it’s 2 a.m. and they need a snuggle. And I’m all too happy to oblige.)

I like sleeping with my kids. It made breastfeeding them so easy. You just roll over and feed them, no need to wake up all the way. By the way, my partner also likes sleeping with the kids. He’s gone from them all day at work, so bedtime is a great time to reconnect with them. There are even studies out there that show co-sleeping is linked to a lower level of testosterone in men. While I realize there is probably no man that’s like, “you know what? I think I’d like a little less testosterone,” it does make sense for parenting. Dads with lower testosterone are less aggressive, more likely to respond to a crying child, will generally be more in-tune with their kids, and take a more active role in parenting. This is a huge win in my book.

But let’s face it, it does cut down on middle-of-the-night marital snuggles that turn into grinding that turns into making out and then segues, happily, into marital sex. The bed is no longer the sexy zone. Instead it’s like the “nurture zone.”

So, obviously this means we never have sex. Or it’s not as spontaneous as it once was. OK, well, maybe the second one is true, but any parent will tell you that spontaneous sex doesn’t happen as much. Because you basically have to wait until they’re asleep. Or until grandma takes them to the mall. Or they start watching TV. Or they’re in a different room.

But — ah ha! — my kids do all of these things, and at the very least, they sleep. So, we’ve just had to take our sex elsewhere, like on the living room couch while watching TV, on the stairs, in the kitchen (some extra cleanup may be required on food prep surfaces), and in other bedrooms. It’s actually sort of fun.

There was a time when this was impossible. We don’t like to talk about that time. When my son was 6 weeks old, my partner and I moved in with my parents. And, well, doing it in the kitchen was not exactly a possibility. Instead, we had two options: do it on the foot of the bed (very quietly and without extraneous motion) or do it on the floor. So, we did so, mostly on the bed. It wasn’t ideal. We couldn’t let loose. I had to be quiet. I had to pray that my parents were watching TV right under us. But, really, my son was too little to be the wiser and he was a pretty good sleeper. The only difficulty was that with him close by, I was still attuned to every little sound he made. It was hard for me to get in the mood.

But when we moved into our own townhouse, it was like a second honeymoon! It didn’t matter that he was still sleeping in our bed because we had so many other venues. In fact, it didn’t take that long for us to conceive a little sister for him.

With the kids in our bed, we had to get creative with our sex life. And a little nudge toward being creative and having fun was actually a great thing for us. First of all, plain old missionary doesn’t work everywhere. There was a lot of spontaneity in terms of “where will we try it next?” and, “will it work in this chair?” We couldn’t be as spontaneous about when we had sex, but we were forced to be spontaneous in how and where. It was great having to try new things; it sort of jump started what could have been a post-baby lull.

The thing with bedsharing and attachment parenting in general is that, in a lot of ways, you put the kids first. We prioritized the kids’ secure attachments above most things. We didn’t leave them with babysitters. We didn’t put them in car seats or swings (known as “baby containers). We held them as much as they wanted. To some this may sound crazy, but I believe this is how Mother Nature intends it. I was always able to respond to my kids as soon as they needed me. My daughter hardly cried as a baby -- I credit her easygoing disposition, but also the fact that I never let her get upset. Any mom knows that there is nothing more distressing than your kid crying or being upset. By attending to their needs quickly and giving them exactly what they needed, I was hardly ever distressed or stressed as a new mom.

Putting the kids first, by general wisdom, is a great way to hurt your marriage. In a lot of ways, my partner was a bit of a second fiddle, and he’d agree with that. He couldn’t breastfeed. He wasn’t as soft of a sleeping surface as I was. He was more of the errand-running, bread-winning half of the couple. He was the support parent. He supported my breastfeeding. He supported the co-sleeping and the baby-wearing. And it quickly became obvious to both of us that the less stressed I was, and the more support I had of my attachment-parenting style, the happier I was. And obviously, when you’re happier and happy with your partner being on the same page as you, the more likely you are to want to have sex. Happy baby. Happy mama. Happy partner.

Having a family bed didn’t hold us back. I’m not saying it’s been perfect. We’re busier than we’ve ever been. And breastfeeding does things to your hormones that can decrease your libido. But for a couple who’s been together for 10 years and has two young kids, I think we’re doing really well.

I love that my partner and I have seen eye-to-eye on parenting issues. He’s on board with co-sleeping. He’s supportive of breastfeeding and homebirth. He was an awesome birth partner. He’s a fun and involved parent. And I happen to find all of these things about him sexy as hell.

More Like This
Stepmom Quotes & Sayings For Every Occasion
Should You Be Giving Your Toddler Melatonin To Help Them Sleep?
Here's When Your Baby Might Start Sleeping Through The Night For Real
These 4 Sleeping Positions Will Keep You Comfortable After A C-Section