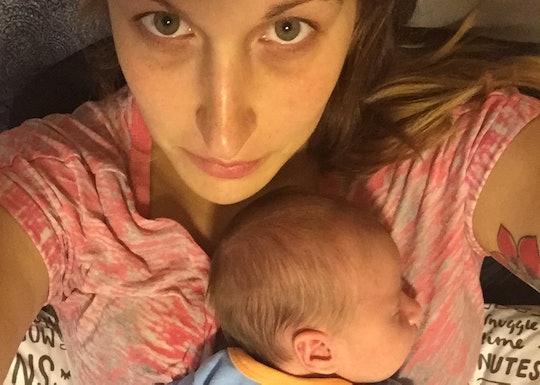 "Sleep When The Baby Sleeps" Is Totally Laughable, Sorry

My husband had saved up his paid vacation time in order to take two weeks off when my son was born and those were the best two weeks of my gosh-darn life. My husband made me soup and served it to me in bed on a little wooden tray. I stayed in bed, took care of our baby and he took care of me. We played board games in the middle of the night when our son was wide awake from having his days and nights confused and then we napped in the early morning hours, all three of us cuddled in bed. It was like we existed in this little bubble, separate from reality, and I barely noticed the lack of sleep because I was warm and cozy in my postnatal nest. The night before my husband had to return to work I remember crying because I didn’t know how I was going to get through the day alone. It still sort of hurt to walk and I had no idea how I was going to take care of this little person while I was still semi-unable to take care of myself. After three days on my own it quickly dawned on me how so much of the advice I had received about taking care of myself postpartum was complete and utter bull. The most laughable piece of advice I received, and the piece I heard most often, was to sleep when the baby was sleeping — great in theory, nearly impossible in practice.

When my husband went back to work there weren’t any more middle-of-the-night board games, life was no longer a hazy blur where I had no idea what time it was — in fact, it was very clear that it was 4:00 a.m. and I was awake and the rest of the world was sleeping, including my husband. In his defense, it’s not because he wouldn’t wake up if I asked him to, but my son’s crib was right next to my side of the bed, the crying didn’t wake him up at night (he could sleep anything, I swear), and I was breastfeeding, so there wasn’t even much he could do at night to help. I knew he needed to function at work so I let him sleep. My son was up every three or so hours at the beginning of the night and then every one and a half hours the second half of the night, and the lack of sleep was quickly catching up with me.

They say the dishes can wait, and honestly that has been my life’s motto since well before giving birth, but what about eating a meal without dropping bits of ground beef on your nursling’s head, or showering or just being awake and alone, in the quiet, with no one touching you or needing you?

I tried to get to sleep early, since I knew I would be up frequently throughout the night, but sleep has never come easy for me and it only got worse when my son was born. Since he slept next to me, I was hyper-aware of any movements he made. I found myself having trouble falling asleep at night because I couldn’t shut my brain off. I started to wear an eye mask to force my eyes to stay closed and listened to guided meditations with my headphones on in an attempt to relax. But oftentimes just as I was falling asleep, my son would rustle and I would snap awake. How was I supposed to sleep when my baby was sleeping if my baby was also terrible at sleeping?

I know the people telling me to sleep when my baby was sleeping and nap when my baby was napping meant well, but anytime I heard someone say that, I wanted to slap them. They say the dishes can wait, and honestly that has been my life’s motto since well before giving birth, but what about eating a meal without dropping bits of ground beef on your nursling’s head, or showering or just being awake and alone, in the quiet, with no one touching you or needing you?

Not to mention I was running on a potent mixture of caffeine, endorphins and anxiety so when I did try to lay down and close my eyes, it was impossible to actually fall asleep. Even on days when I was trapped laying next to him because he had fallen asleep nursing and I was afraid he’d wake up if I rolled away, I couldn’t calm my new-mommy mind enough to fall asleep, and often wound up reading or staring at the ceiling. It was like my body was working so hard to sustain itself on so little sleep that once my mama motor got going, it was kind of impossible to turn off.

Yes, I so desperately needed to sleep but I also needed to have time to be Christine and read books, do yoga or bake muffins, and I could not easily do those things when my baby was awake as he was not a huge fan of being put down.

Even now that my son is 2, I still have trouble getting to sleep at a reasonable hour. Every night I tell myself that I am going to bed immediately after he goes to sleep and it just never happens. I wind up scrolling through social media or getting caught up watching a documentary on netflix and before I know it, it;s midnight.

The truth is, those few hours between putting the little ones to bed and going to sleep themselves are really the only time in a mom’s day when they can be themselves. They don’t have to wipe anyone else’s nose or shuttle anyone to school or dial into any conference calls- they can finally just be.

So mamas, if someone tells you to “sleep when the baby sleeps” but all you can think of doing when that sweet little cherub closes their eyes is finishing your binge -sesh of Tidying Up With Marie Kondo on Netflix you do you.

More Like This
Does Pumped Breast Milk Have Antibodies? Experts Weigh In
Why Does My Baby Cough While Breastfeeding? Experts Explain
9 Bedtime Mistakes That Are Keeping Your Baby Awake & How To Fix Them
Gathre’s Winnie The Pooh Collection Is Finally Here