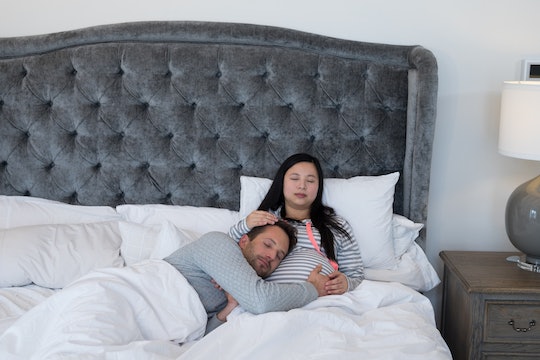 Sleeping while pregnant can definitely be tough. Not only do you have an entire baby inside of you, but now you need to find a whole new, comfortable sleeping position. For those that usually sleep on their back, it can be especially difficult. But, according to a new study, sleeping differently while pregnant may improve fetal health.

A recent study published in the American Academy of Sleep Medicine has found evidence to suggest that positional sleep therapy during pregnancy may have a positive impact on both maternal and fetal health. In other words, researchers think that changing the way you sleep may have a much bigger impact than originally assumed.

Researchers focused on reducing time women spent in the supine sleeping position. The supine position refers to sleeping on your back in contrast to other positions like prone, which refers to sleeping on your stomach, as outlined by American Association of Sleep Technologists . In the past, avoiding this position has been linked to lowering blood pressure for patients with obstructive sleep apnea.

Positional therapy, according to Science Daily, "is a well-accepted way to reduce supine sleep time and increase side-sleeping in adults with sleep-disordered breathing, no prior studies have examined its use in pregnant women."

Luckily, these researchers decided to step up to the plate. And found that, maybe, more people should reconsider how much they sleep on their back.

Authors of the study said, according to Science Daily, that most pregnant women spend about 25 percent of their sleeping time in the supine position, or lying on their backs. This position may be a risk for stillbirth and low birth weight.

Lying on your back while pregnant means that the weight of the pregnant uterus slows the return of blood to your heart, as outlined by WebMd. This means the baby is receiving less oxygen and fewer nutrients.

For the study, Science Daily outlined that researchers worked with 25 healthy women during late pregnancy, between 32 and 38 weeks of gestation. The researchers evaluated women for two consecutive nights while they slept at home. One night, according to Science Daily, stood as the control. During the intervention night, women slept while wearing the PrenaBelt, a positional therapy tool designed specifically for use with pregnant patients, as outlined by EurekAlert.

Principal investigator Jane Warland, associate professor at the school of Nursing and Midwifery at the University of South Australia in Adelaide, said, according to Science Daily:

"Our findings suggest that women can comfortably sleep wearing a device around their waist that effectively stops them from sleeping on their back. Using positional therapy to keep the pregnant mother off her back may reduce supine sleep in late pregnancy and may also provide both maternal and fetal health benefits, with minimal impact on maternal perception of sleep quality and sleep time.

Although more research needs to be done to fully explore the benefits and any possible risks of positional therapy during late pregnancy, the current results are promising!