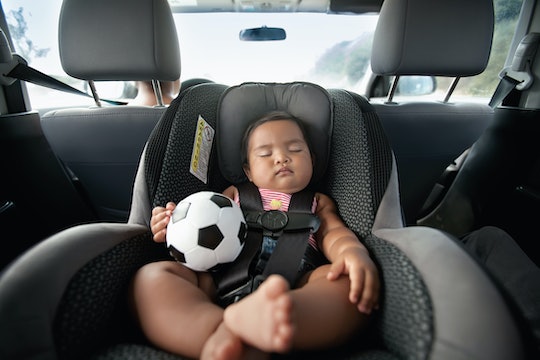 Sleeping In Car Seats & Bouncers Is Not Safe For Infants, New Study Finds

Desperate times, call for desperate measures. At least that's the usual mindset for sleep deprived parents who just want to get their wide-awake infants down for a nap. So when baby finally falls asleep in a car seat while out for a ride, or in a swing while swaying to lullabies, a parent's first instinct is to leave them there. Unfortunately, sleeping in car seats and bouncers is not safe for infants, a new AAP study says.

Researchers from Children’s Mercy Hospital in Kansas City, Missouri, looked at 11,779 infant deaths over the course of ten years found that 348 babies died in sitting devices, the majority of which were car seats, according to The American Academy of Pediatrics. More than 90 percent of those deaths happened while the car was not being used as directed. The median age of the infants affected was 2 months old.

Using car seats and other sitting devices like bouncers, swings and strollers as a place to sleep posed a significant risk to babies because the devices were not used as recommended, the study showed.

While the American Academy of Pediatrics already discourages sleeping in any sitting devices for long periods of time, this study was the first of its kind to link infant mortality to the practice, according to WTOP Washington, DC.

Infants should only sleep in a crib or bassinet in a horizontal position until one year of age, according to the Huff Post. Babies usually sleep about 12 to 16 hours a day, so this should be done in proper places and not in sitting devices.

“While car seats are always the best place for babies when they are being transported in a vehicle, that doesn’t mean they are the safest place when they’re sleeping outside of the car,” Jeffrey D. Colvin, M.D., J.D., FAAP, co-author of the study said in a statement.

Falling, flipping over, positional asphyxia (suffocation due to positioning of baby's body), or strangulation from improper buckling of the straps, are among the top causes of death in sitting devices when used unsupervised or for sleeping, according to The Centers for Disease Control.

Recently, 4 million Fisher Price Rock and Play Sleepers were recalled after 32 infant deaths were reported, according to VOX. In these instances, babies were able to roll over or twist, even while being strapped in, causing suffocation.

But if you happen to catch your infant dozing while in the car, do not panic. A car seat is still the safest place for baby while driving, even if he or she is sleeping soundly.

“The car seat is where infants should be always when they’re traveling and it’s the absolute safest place for that infant to be, whether they are awake or asleep,” Colvin said in an interview with Today.

“But you just have to remember that car seats are for cars and when you get out of the car, the safest thing to do, if your infant is still sleeping, would be to put them in a bassinet or a crib.”

Researchers from the study suggest the following for keeping baby safe while using carseats, according to Today:

It's safe to say that most parents have probably let their sleeping babies lie in a carseat or swing from time to time, but this new study proves that it isn't worth the risk. A sleeping baby is safest in his crib.