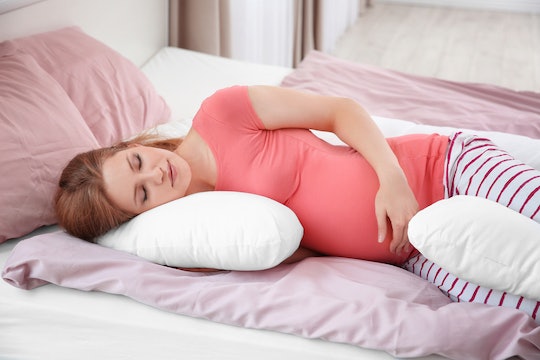 Sleeping On Your Back During Pregnancy Might Be A *Really* Bad Idea, New Study Says

Anyone who has ever been pregnant knows that it doesn't take long before it becomes basically impossible to sleep comfortably. Between the growing belly, and the need to get up to pee about a hundred times a night, pregnancy isn't usually a time of restful slumber. As a full-time stomach sleeper as a non-pregnant person, I quickly had to figure out a new sleeping position when I became pregnant with twins, and with a little help from a pregnancy pillow, I settled on an at-least-somewhat-comfortable back-and-side-sleeping hybrid position. A recent study out of the U.K., though, found that sleeping on your back during pregnancy doubles your stillbirth risk, and that's something that all parents-to-be need to be aware of.

According to ITV News, researchers involved in The Midlands and North of England Stillbirth Study (MiNESS) interviewed more than 1,000 women and found that those who slept on their backs in the third trimester had "a 2.3-fold increased risk of late stillbirth" compared to those who slept on their sides. And while it can seem scary to think that something as seemingly benign as a sleep position could actually affect stillbirth rates, the study's findings have the potential to make a huge impact. According to the MiNESS study, the findings of which were published in the British Journal of Obstetrics and Gynaecology Monday, the stillbirth rate in the U.K. (currently around 1 in 225) would be reduced by 3.7 percent if all pregnant women were to sleep on their sides from 27 weeks onward — and internationally, it's estimated that up to 100,000 babies could be saved from proper maternal sleep positioning.

In the United States, approximately 24,000 babies are stillborn each year, according to the Centers for Disease Control, and the causes of those deaths aren't often known. Certain risk factors have been identified though: smoking during pregnancy, being diagnosed with obesity, and having certain conditions like high blood pressure or diabetes can increase a woman's risk of stillbirth; and, demographically, black women, teenagers, and women older than 35 are more likely to have stillbirths than others. But many stillbirths are ultimately considered to be "unexplained," especially late stillbirths occurring between 28 and 36 weeks gestation. Yet, according to the MiNESS study, this is also the stage at which side sleeping becomes most important, perhaps shedding some light on ways that at least some of these late stillbirths could be prevented.

According to Tommy's, a British miscarriage, stillbirth, and premature birth charity — and one of four charities that funded the research study — it's still not known exactly why a woman's sleep position could affect her risk of stillbirth, but researchers have at least proposed some theories. For one, researchers think that in the third trimester, the weight of the baby and the uterus could restrict placental blood flow if the mother is sleeping on her back. It's also possible that the mother herself may experience trouble breathing if she lies on her back, particularly if she has been diagnosed with obesity (which could be one reason why being obese has already been identified as a risk factor for stillbirth).

But even without fully understanding the correlation between sleep position and late stillbirth rates, the research findings are eye-opening — especially since changing your sleep position while pregnant is an easy way to lower your risk. According to Sands, a British stillbirth and neonatal death charity that also helped fund the MiNESS study, pregnant women should go to sleep on their side anytime they expect to fall asleep during their third trimesters, including for daytime naps, or after returning to bed after getting up in the night. But don't worry too much if you wake up lying on your back: the position you fall asleep in is actually the one you hold the longest during the night. If you plan on falling back to sleep though, make sure you roll over onto your side before doing so.

Interestingly enough, the MiNESS study also found that it didn't actually matter which side a woman sleeps on, which debunks the generally-held notion that pregnant women should sleep on their left sides to improve circulation, according to WebMD. According to Tommy's, The MiNESS study did not find a difference in risk between sleeping on the right or left side — although since other studies have found a link between the two, it might not be a bad idea to try to prioritize sleeping on the left side anyway.

Prior to the completion of the MiNESS study, earlier studies — including one out of the University of Auckland in New Zealand published in October, according to Science Daily — also found a link between back sleeping and increased stillbirth risk. But as the largest study to date examining maternal sleep and late stillbirth, MiNESS is valuable confirmation that encouraging pregnant women to sleep on their sides could have a life-saving impact for their babies.

Stillbirth is certainly one of those things that no expecting parent wants to think about, let alone experience. But the fact that it happens everyday means that it is absolutely worth finding ways to help prevent it. While there is no definitive way to stop stillbirth from happening — and while it would be both inaccurate and terribly unfair to suggest that any woman's unexplained stillbirth was actually caused by back sleeping — the research is at least offering one possible way to make stillbirth less likely to occur. Sleeping on your side every night when you're already pregnant and uncomfortable might not seem particularly enjoyable, but it's a relatively easy change to make, and could have a big effect.