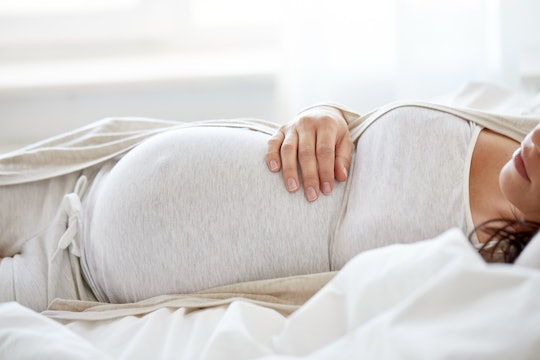 Study: Sleeping On Your Side During Pregnancy Significantly Reduces Stillbirth Risk

Taking precautions during pregnancy and feeling concerned about the well-being of your baby is a natural part of antenatal and postnatal anxiety. But women can take respite in knowing that simple changes can significantly reduce certain risks during pregnancies, according to a new study. An international study led by researchers in New Zealand suggests that sleeping on your side during pregnancy reduces stillbirth risk by half.

The study, published today in The Lancet's EClinicalMedicine.com, found there is a risk of stillbirth associated with pregnant women sleeping on their backs during their last trimester. Changing sleeping positions to the side in the final three months of pregnancy can reduce that risk, according to the study. Lead author of the study, Professor Lesley McCowan, advised sleeping on either side after 28 weeks instead, according to The Sydney Morning Herald.

The research found — according to an article on the findings authored by McCowan and Robin Cronin, and published in The Conversation — the stillbirth risk linked to mothers lying on their backs is due to the associated reduced blood flow to the womb. McCowan explained, citing recent research also conducted by the University of Auckland, the mother’s blood circulation in her abdomen’s major vessel — the inferior vena cava — is restricted by as much as 80 percent due to compression by the womb when she lays on her back.

The study speculates that while healthy unborn babies can "compensate for reduced blood supply," babies who are "unwell" or otherwise "vulnerable" are at risk, McCowan told The Sydney Morning Herald.

The research showed that the risk of stillbirth is increased about 16 times if a mother pregnant with a “very small baby” sleeps while laying on her back after 28 weeks, according to MedicalXpress.

Another study also conducted at the University of Auckland and published in The Journal of Physiology in 2017 showed that the fetus was less active when the mother slept on her back.

The researchers, who were the first to monitor unborn babies overnight while also monitoring the mother’s sleeping position, as Science Daily reported, found that the fetus was only in an “active state” when the mother was sleeping on her left or right side. As soon as the mother changed her position to sleeping on her back in the 2017 study, the unborn baby reduced activity, becoming quiet or still. According to Northwestern Medicine, fetal activity is an indication of the baby's well-being,

Peter Stone, a lead researcher on that study, told Science Daily at the time, "In the situation where the baby may not be healthy, such as those with poor growth, the baby may not tolerate the effect of maternal back sleeping."

Now, researchers suggest that identifying and modifying risk factors can prevent approximately 6 percent of late stillbirths, according to Stuff.co.nz.

If you’re back sleeper at 28 weeks of gestation and entering your last trimester of pregnancy, getting accustomed sleeping on your sides instead may be the best course of action. While pregnancy is tough and changing habits is not easy, this research is an invaluable resource for expectant moms.