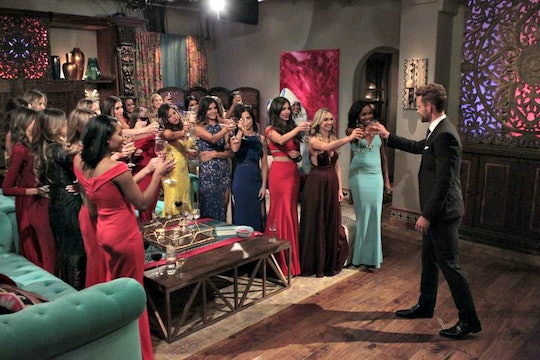 'The Bachelor' Is Giving Business Owners Some Love

The Bachelor is problematic for feminists. The whole premise is ridiculous and the idea that 30 women are all competing with each other, based on their looks and how well they mold to the man's idea of "perfect" is just, well, it's not great. When you throw in alcohol and the producers start pitting the women against each other, it's even worse. But if you hate-watch it, you can at least tell yourself that you're playing into the patriarchy. One of the best ways to do that is to keep track of the job descriptions of the women. Usually, most of them are really ridiculous, making it seem like women with no career are more the "marrying type." But this season career-drive women and small business owners are a theme on The Bachelor, and it's really quite refreshing.

As someone who hates to admit that they love the show, it lessens my feminist guilt knowing that the women have degrees and plans for their life outside of just being on a reality show to find a man. Not that getting married and starting a family isn't a goal enough on its own because it definitely is. But it's still a refreshing change-up to help showcase a wider gambit of women and something that I hope to see continue throughout future seasons. This year there are some truly badass and admirable women to look up to, which is amazing. And as a way to pay homage to that fact, here are the contestants who have experienced outstanding success in their small business ventures...

Raven, 25, owns her own clothing boutique called Grey Suede in Arkansas that she just opened last year. The business seems to be booming as she's savvily using her new fame to sell The Bachelor merch online.

This woman has not one, but three, small businesses in Los Angeles. An ice cream shop and two nail salons. She opened her first one when she was just 23.

Michelle is a co-founder of Main Squeeze Lemonade, a food truck that sells fruit drinks and tea. The 24-year-old started the business with a friend as a stationary place on the Venice Beach boardwalk, but then switched it up after that was banned.

OK, OK, we all have some feels about Corinne. And it's not exactly her company, but she does work for her father. Even if she has a nanny and naps too much, she's working at least some of the time. By the way, she's also a model and an actress who's appeared in music videos by DJ Khaled and Two Chainzz.

Along with these three (and a half) entrepreneurs, other contestants have very cool jobs as well. Like Danielle the neonatal nurse, Taylor, the mental health counselor, Briana, a surgical nurse, Jaimi, a chef, Rachel, the attorney, Sarah, a teacher, and a slew of photographers, more registered nurses, managers, and marketing reps. And an aspiring dolphin trainer, just for fun.

You have to hand it to ABC — the show still needs some work when it comes to empowering diverse women. But this season is an encouraging step in the right direction. Well done!