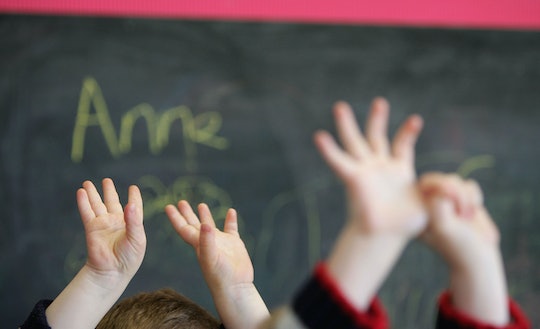 Of all the debates surrounding education reform and school spending, the one that's usually easiest for everyone to agree on is that smaller class sizes tend to be easier for teachers to manage — and therefore, are usually better for helping kids learn and achieve in school. But after some 60 years of research into the magic number of teachers and students for the best classroom experience, experts are starting to question that assumption when it comes to very young children. And, as parents across the country prepare to send their little ones to school for the first time, a new study suggests that smaller preschool class sizes don't really matter for kids of this age.

The findings are set to be published in the September edition of Educational Evaluation and Policy Analysis, according to Education Week. Using a national database of results from early childhood education programs recorded between 1960 through 2007, researchers found that shrinking class numbers didn't produce any real difference in outcomes for most children, Education Week reported. As long as class sizes were held at or below 20 children — with one teacher for every 10 students — the majority of students did just fine, researchers found.

For parents, educators, and early learning advocates, the implication here is important. The question of how to invest funds to raise student achievement is one of the most basic balancing acts for state lawmakers and classroom educators. And prior research has established that smaller class size is closely linked to student outcomes, including better test scores and lower dropout rates, according to a report from The Washington Post .

But exactly how small to go — and how much more money to allocate — to have a real, sustainable impact on student success has been far less clear. According to the National Center for Educational Statistics, the trend toward smaller classes started in the 1980s, and (absent of the impact of local budget cuts), has hovered between 15 to 17 students per teacher since the late 1990s.

Lead author Jocelyn Bonnes Bowne, currently a senior research specialist with the Massachusetts Department of Education, told Education Week that this new set of findings could lead to important discussions about the value of spending to reduce classes below 20 students, except in very specific cases.

Committing the resources to very small classrooms and rations might be important to do [for children with high needs]. Largely, if you're within what is typical, we do think reducing class sizes by small amounts is not going to gain you much in terms of results.

Browne noted in her interview that the study did not focus on children with special needs. She also added that the study did not look at extreme class overcrowding; there weren’t any 50-student classrooms, or teachers dealing with dozens of kids on their own. The range of class sizes examined was between 11 to 15 children, Education Week reported, with an average of nine students per teacher.

So, when faced with limited funds for education reform, reducing class size may not be the clear solution, according to these new findings. But where would additional spending make a difference for kids? Perhaps the next slate of studies will look at what happens to student outcomes when those funds are instead used to raise teacher salaries and offer more classroom resources.