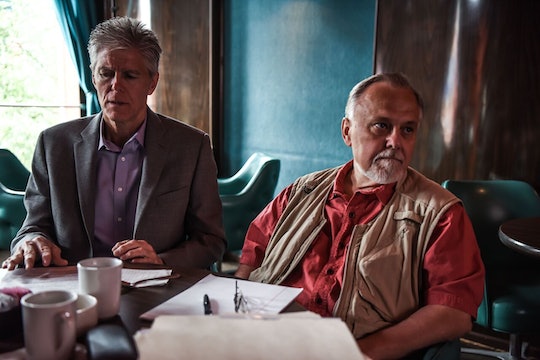 If you're like me and just can't enough True Crime, then you're probably already elbow-deep in Oxygen's new limited series, Smiley Face Killers: The Hunt For Justice, produced by 44 Blue and Blumhouse TV. The series investigates the theory that hundreds of young men found dead in bodies of water were actually the murder victims of an organized underground gang called the Smiley Face Killers — so named for the smiley face graffiti found near the bodies. An exclusive clip from Episode 2 takes a closer look at some forensic evidence found on 21-year-old Luke Homan — suggesting the bruises on his forehead were not the result of an unlucky slip into the Mississippi River.

According to local newspaper La Crosse Tribune, Homan was found dead in the Mississippi River on Oct. 2, 2006 in La Crosse, Wisconsin, where he had been a senior at the University of Wisconsin-La Crosse. An autopsy report stated that Homan died of cold water drowning with acute alcohol intoxication as a factor. But Homan's parents, Jerry and Patti, don't believe that he died of accidental drowning. Speaking to the La Crosse Tribune and more than ten years later to Oxygen, Patti says that her son always hated the water and generally avoided the river when he could.

In this clip from Episode 2 of Smiley Face Killers, retired NYPD detective Kevin Gabbon and criminologist Dr. Lee Gilbertson take autopsy photographs of Homan to a forensic toolmark analyst to review. They were looking specifically at the particular bruising on Homan's forehead. According to the expert, the pattern of the bruising could be consistent with a boot print, meaning that it's possible someone had stomped on Homan's forehead with a boot, and the bruises were not the result of an accidental fall into the river after all.

In another clip of the episode, Gabbon and Gilbertson consult with retired FBI agent Bobby Chacon, who says that the wounds to Homan's head and hands make it look as if he had been in a fight. These could have been the result of a fight at a bar that Gilbertson says was rumored to have taken place on the night that Homan disappeared.

Chacon furthermore said that it didn't look like Homan's body had been in the river for 50 hours as was assumed in the autopsy report. He stated in the doc that the bruises looked too red to have occurred post-mortem and that had the body been in the water for that long, it would have been much more covered in debris and mud than it was. He conjectured that the body was only in the water for three to 12 hours, leading Gannon to wonder aloud where Homan had been for rest of the nearly two days he'd been missing.

As of right now, there are no hard and fast answers for what happened to Homan, or even if the Smiley Face Killers really exist at all. But if true crime fans want to know more they can always watch the Oxygen series which airs on Saturday evenings at 7 p.m. ET.