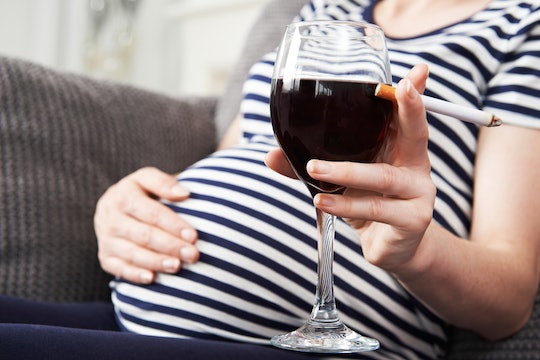 Mothers-to-be are expected to give up a lot for the health of their future children. That extra cup of coffee, sushi, and after work drinks become a thing of the past — at least for those crucial months. But despite extensive research proving the risks, smoking and drinking during pregnancy is still a problem, according to a study conducted in the United Kingdom. Rather than heed the warnings of their health care providers, women are smoking cigarettes and drinking alcohol behind closed doors to avoid public judgement.

Researchers from Cardiff University interviewed expectant women to determine their smoking and drinking habits while pregnant, as well as their feelings about the experiences. According to statistics released by the Welsh government — where Cardiff University is located — 21 percent of women in the country are still smoking when they attend their first prenatal appointment. Some of these women reported feeling "irritated and alienated" by those around them if they smoked or drank in public, according to the BBC.

The women who participated in the study reported "awkward" relationships with their midwives due to smoking and drinking habits, as well as a "judgmental tone" of advice, according to MSN.

Ultimately, feeling judged made the women less likely to seek support for their smoking and drinking.

And while some women also reported that they were judged negatively by their partners for choosing to smoke or consume alcohol, others reported that their significant others encouraged them to drink alcoholic beverages while at home, according to The Independent.

Negative feedback from partners and midwives did little to stop women from smoking, according to MedicalXpress. Instead, they just began to do so in private, and told researchers that they believe it is "acceptable" for pregnant women to make these choices behind closed doors.

In response to these findings, researchers recommended that concerned parties employ empathy instead of judgement. Study author Dr. Aimee Grant, from Cardiff University's Centre for Trials Research, told the BBC as much. "Moral judgements are commonly directed towards mothers through reference to health behavior in pregnancy, and working-class mothers are particularly subject to this criticism, ignoring the challenges of living on a low income," she said.

Dr. Grant added, "Our study shows that these looks and comments — including by members of the public — irritate and alienate pregnant women, making them less likely to seek help. No one wants to be judged and shamed."

Smoking during pregnancy has been linked to lower birth weight in infants, premature delivery, miscarriage, birth defects, and Sudden Infant Death Syndrome (SIDS), according to the Centers for Disease Control and Prevention. For these reasons, it is advised that women stop smoking before getting pregnant or as soon as they know they are expecting, ideally while still in the first trimester.

But Dr. Melissa Goist, OB/GYN, Ohio State University Wexner Medical Center told SheKnows that it is never too late to quit. "Although smoking cessation in the first trimester is recommended, literature shows that there are fetal benefits to smoking cessation throughout pregnancy," she said. "It is never too late to get a mother to stop smoking for her benefit as well as her children and unborn children."

There are various ways to quit smoking, including the cold turkey method, weaning yourself off nicotine, and nicotine replacement therapy. But one thing that isn't helping pregnant women quit: shaming.

Dr. Dunla Gallagher, co-author of the study published by Cardiff University, told the BBC that for many some low-income, expectant mothers, smoking is a "coping strategy" and "rather than stigma, women need empathy and a recognition of the challenges that pregnancy can bring in terms of women's independent choices."

If you are expecting a child and struggling to give up smoking or drinking habits, seek help. If you feel uncomfortable speaking with your doctor or midwife about it — because of perceptions of judgement or any other reason — there are a number of resources available to you. The NHS offers a Smoke Free Hotline as well as one-on-one counseling sessions for those located in the United Kingdom. And for expectant mothers in the United States, the CDC offers a lengthy list of resources to help you quit smoking.

And finally, for those interacting with pregnant women who may be smoking or drinking, give them what they really need: support, not judgement.

More Like This
Here's The Truth Behind The Theory That Itching During Pregnancy Means It’s A Boy
Here’s What It Means If You Give Birth During A Solar Eclipse
Here's What You Need To Know About Heated Car Seats & Pregnancy
Yes, It’s Possible To Get Pregnant If You Have An IUD