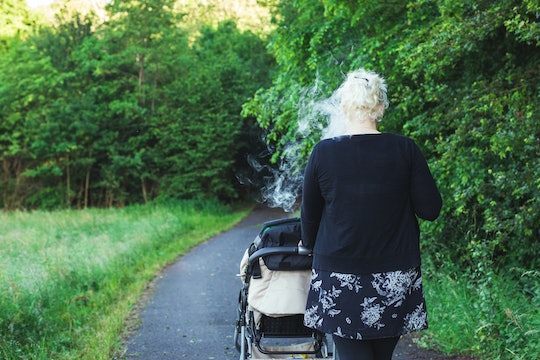 Here's Another Reason Why Smoking Near Kids Is Bad For Their Health, According To New Research

While many adults scramble to find solutions to snoring problems — from nose strips to even corrective surgeries — the same problem in kids is often seen as harmless. On the surface, snoring in children seems like a simple bedtime quirk, but — for some kids — snoring could actually be a response to being exposed to "passive smoking." And according to new research, smoking near children could lead to a serious health condition later in life.

In a 2018 study published by the Journal of Epidemiology & Community Health, researchers examined the link between exposure to smoking and habitual snoring. Researchers specifically looked at the effects of environmental tobacco smoke (ETS), also known as "passive smoking." Using a total of 24 studies with 87,829 participants, according to The Peninsula, researchers determined that exposure to smoke before and after birth raised a child's odds of habitual snoring compared to kids who were not exposed to it.

So, what, exactly, is the problem with habitual snoring? As Lucy Popova, a researcher who was not involved in the study, told Reuters, "snoring is often the first step towards developing sleep apnea and has been linked to high blood pressure, stroke and heart disease."

Sleep apnea is a disorder characterized by regular pauses in breathing while asleep. In mild cases, according to the Mayo Clinic, it can prevent somebody from getting a full night's sleep as their body will jolt them awake whenever it senses they aren't getting enough air. However, an additional complication includes risk of high blood pressure or heart problems, as "sudden drops in blood oxygen levels that occur during sleep apnea increase blood pressure and strain the cardiovascular system," as explained by the Mayo Clinic.

Additionally, the Mayo Clinic also notes that one of the causes of sleep apnea can be smoking, with smokers three times more likely to have "obstructive sleep apnea" than those who've never smoked.

The impacts of smoking around children are important to explore, but this new study goes the extra step and looks at what happens when a child is simply exposed to areas where regular smoking occurs. According to the Canadian Centre for Occupation Health and Safety, ETS is "exposure to tobacco smoke — not from your smoking, but from being exposed to someone else's cigarette, cigar, or pipe smoke." But, it can also be used to refer to the material in "indoor air that originates from tobacco smoke," the centre noted.

If exposed to smoke while their mothers were pregnant, children had a higher chance of being "habitual snorers" later in life. As outlined by Reuters:

Children exposed to smoke while their mothers were pregnant were almost twice as likely to be habitual snorers. After birth, children whose mothers smoked were 87 percent more likely to snore than unexposed kids. Other exposures to smoke in the home, including fathers who smoked, raised the risk by 45 percent.

Researchers also found that the younger a child is, the more susceptible they are to developing negative side effects.

So, what can parents do? Quitting smoking is the best long-term solution, of course, but it's obviously not an easy one to achieve. There are medications and different programs to help, but they don't always work or answer for why people are smoking to start. Plus, they can sometimes be inaccessible, due to factors like cost. But there are still other steps for people to take.

First, don't smoke indoors or in cars with children. Because ETS includes smoke that hangs around, or is filtered throughout systems, it's important that people limit this type of exposure. Although smoking outside doesn't completely eliminate a child's exposure to smoke, it's still better than smoking indoors, according to the Consultant360, which added that parents should also considering changing their clothes and washing their hands after smoking.

By taking some simple steps to limit children's exposure to passive smoking, everybody will be able to have a peaceful night.