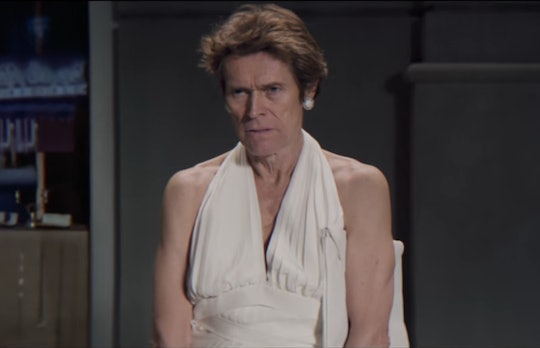 Sometimes risk-taking pays off — and other times it goes terribly, terribly wrong. During Sunday's big game broadcast, a Snickers Super Bowl ad was criticized by Twitter users for what people claimed was an anti-feminist and transphobic theme. Employing the hashtag #NotBuyingIt, incensed users laid into the commercial spot full-force.

"Hey Snickers, have a Snickers," wrote viral content site Upworthy. "You get a little transphobic when you're hungry." Others bemoaned what they felt was just another show of antiquated sexism. "Snickers, we didn't need to bring that kind of sexism back," tweeted nonprofit organization About Face.

The particular ad in question featured a fake movie crew on the set of a vintage movie — specifically Marilyn Monroe's famous 1954 hit, The Seven Year Itch — filming that infamous subway grate scene, where Monroe's dress flies around her, exposing her undergarments. Only, instead of a soft-spoken blonde actress, the person standing over the infamous subway grate this time is characteristically gruff actor William Dafoe.

As Monroe's iconic white dress blows up and over Dafoe's face, exposing his fitted white underwear, the actor expresses his discontent with having to film such a "disastrous" scene. "Sweetie, don't look at me like that, it's gonna be amazing," replies the film's smarmy director, upon seeing the actor's disgruntled expression. When Dafoe argues that the scene is impractical ("Who's the genius who puts a girl in heels on a subway grate?" Dafoe yells at one point), a producer hands him a Snickers bar, saying, "Eat a Snickers — you get a little cranky when you're hungry." Magically, Dafoe then morphs back into a giggling, sweet-faced Monroe, and all is good in the fake Hollywood world once more.

Twitter's reaction, of course, was swift and harsh:

Whether or not the ad was intended to be anti-feminist or not was not necessarily up for debate. Certainly, no company in its right mind ever goes into the biggest commercial event of the year hoping to stir up negative controversy for itself. However, given the immediate and scathing backlash Snickers received on Sunday, perhaps the company would do well to take the reaction in stride and rethink its plans for next year's Super Bowl. (I'm crossing my fingers for you, Snickers, because who doesn't love your delicious, nougat-filled candy bars?)

Check out the ad below and judge for yourself:

Here's a tip: Do better, Snickers.