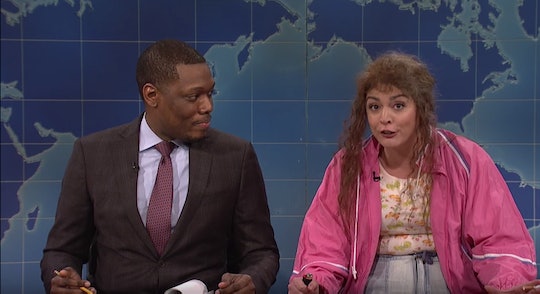 'SNL' Makes Fun Of Pizzagate & Proves Exactly Why It's So Absurd

Saturday Night Live does not shy away from making fun of, well — anything or anyone. The often hilarious and very topical sketch comedy show is never afraid to present commentary on issues ranging from people (President-elect Donald Trump) to events — like Pizzagate. The show's commentary points out the more ridiculous aspects of our day to day lives, allowing the audience take a skeptical look at everything around them. That is why Saturday Night Live making fun of Pizzagate proves just how ridiculous and absurd it really is.

SNL's commentary really does accurately sum up just how ridiculous the believers in Pizzagate and fake news actually seem to everyday people who aren't exactly up to date on the latest conspiracy theories. Case in point, the use of SNL's favorite cigarette-holding character from the country, Cathy Anne — played by the very hilarious Cecily Strong — to emphasize this. During an appearance on Weekend Update, Cathy Anne explains to co-host Michael Che, in her words, what Pizzagate is. "Can you believe that idiot went into that pizza shop with a gun and he didn't leave with no money or no pizza," Cathy Anne told Che. The video clip is definitely worth watching, if only for Strong's ability to make Che laugh as the incredibly ridiculous character — and for the reason that it explains exactly why Pizzagate is so absurd.

It is so absurd because the basis of Pizzagate is rooted in conspiracy and fake news — and despite all this, it still prompted a man to bring a gun into a popular D.C. pizza shop and allegedly fire a shot into the ground anyway. According to Salon, the armed man — Edgar Welch — allegedly drove to the Comet Ping Pong restaurant in D.C. to "self-investigate" whether the shop had "a secret pedophilia dungeon in the basement" despite this only being a rumor and nothing more.

According to Salon, the so-called "Pizzagate" conspiracy theory (which is 100 percent contrived and has no basis in fact, whatsoever — important to note) started on websites like 4chan and Reddit, where it then escalated into something much larger than anyone could ever have imagined. (Which is why now, it's more important than ever that people know how to identify false news from the truth as well.)

"The intel on this wasn't 100 percent," Welch told The New York Times in a surprising interview this past week, of his alleged "investigation" into the pizza joint. "I just wanted to do some good and went about it the wrong way."

But SNL and Cathy Anne's final take on Pizzagate and false news? "I think everyone needs to get off the damn internet for one day, including Donald Trump," Cathy Anne told Che. Cathy Anne's commentary might be right — maybe we do need to go outside and stay away from the fake news for a while. Because if Pizzagate has proved anything, it is that not everything on the internet is to be trusted — nor should it be the basis of a dangerous, armed "investigation."