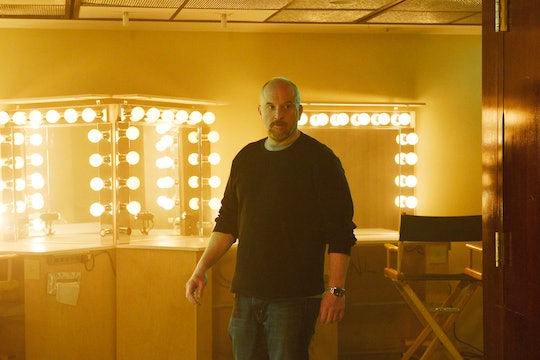 When Saturday Night Live is on, it's on. This weekend, it was a little off with a lackluster cold open and monologue. But then Saturday Night Live mocked Kendall Jenner's Pepsi ad, which was a major source of controversy this week, and the show tackled the topic in the best way. Louis C.K., who was the host of the evening, wasn't in the skit. In fact, the skit was actually less about the commercial and more about the person behind it — the director.

The ad focused much less on what was happening on the screen, and more on what was happening behind it. The director, played by Beck Bennett, was shown as an excited, eager director who, through the process of speaking to multiple family members and neighbors, realized that his well-intentioned ad was potentially going to be problematic. The Pepsi ad, in real life, was pulled earlier this week.

"So it’s an homage to the resistance and for the huge protests in the streets reminiscent of Black Lives Matter," Bennett's director character said to someone on the phone. "And so, everybody is marching, and they can see police right? And they think it’s gonna go bad because there’s kind of, like, a standoff. And then Kendall Jenner walks in, and she walks up to one of the police officers, and she hands him a Pepsi. And then, that Pepsi brings everybody together. Isn’t that, like, the best ad ever?"

Viewers never hear the other side of the conversation, but it's clear from Bennett's facial expressions that the person was not telling him what he wanted to hear. Although, it is important to remember that there is no way of knowing how the production of the commercial actually went down, it was clever to turn the tables on a story that would have felt a little old by Saturday's air date for the sketch comedy show.

Other topics SNL tackled topics in Louis C.K.'s episode were much more politically charged. Bill O'Reilly and Trump's Syrian missile launch were huge skits for the night, both of which involved Alec Baldwin, because why not use someone who can essentially play every single character needed for political commentary nowadays.