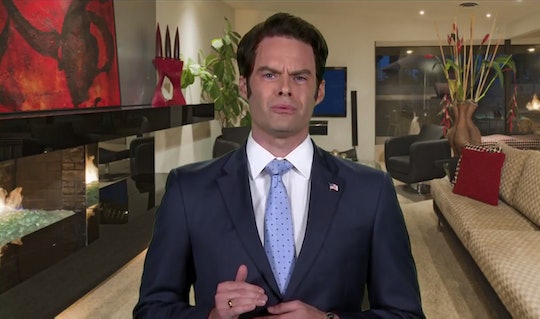 SNL's "The Mooch" Parody Will Have You Missing Anthony Scaramucci

Ah, Mooch, we hardly knew you. The bombastic businessman was only White House Communications Director for a week and a half, but what a wild ride it was. While plenty of people felt that was exactly long enough, some might change their minds after seeing Saturday Night Live's Anthony Scaramucci parody on the new, long-form summer edition of Weekend Update. The miniseries, which premiered on Thursday, will run for four weeks, playing catch-up on the overwhelming amount of news coverage SNL missed during its hiatus.

"Missing Scaramucci was sort of like missing Christmas," co-host Colin Jost told NBC News earlier this week. But considering how fast The Mooch blew into and back out of our lives, the writers must have felt a little grace period was acceptable. Series veteran Bill Hader appeared as the beleaguered former Trump mouthpiece, giving the world everything they'd hoped to see in Scaramucci's abruptly-cancelled live online event. The sad part is that the real Mooch probably won't be in the news much longer, so we're unlikely to see Hader's impression again. Unless, of course, Scaramucci decides to return to the public eye, giving Hader more material. True, it's probably not going to happen, but we can dream, right? Check it out when the kids aren't around:

If you can't watch right now, here are a few tidbits to entice you to come back later: Scaramucci Facetimed Weekend Update co-host Michael Che during a live broadcast, saying, "When I hear my name three times, I appear like a goombah Beetlejuice." He then made a correction about his infamous Steve Bannon quote from The New Yorker, compared himself to cocaine, and insisted that he had no regrets about his ridiculously short White House tenure, despite the fact that he sacrificed his business, his family, and his reputation "all to be king of Idiot Mountain for 11 days." The real Mooch apparently had a good sense of humor about the whole thing, because he tweeted Hader some wardrobe tips on Friday morning.

Hader's brief appearance also serves as a painful reminder that with former White House Press Secretary Sean Spicer out of a job, New Yorkers probably won't be spotting Melissa McCarthy's Spicey tooling around Manhattan on her rolling podium anymore. Sad! But it also proves that no matter how fast the White House cycles through employees, SNL will always find a way to lampoon them, no matter how much it infuriates the boss. Personally, I'm hoping Kate McKinnon and Melissa Villaseñor will take on Lara Trump and Kayleigh McEnany's bizarre Facebook propaganda videos in Season 43. But until then, at least there's Weekend Update. You can watch the first episode online, and catch the rest Thursdays nights at 9:00 on NBC.