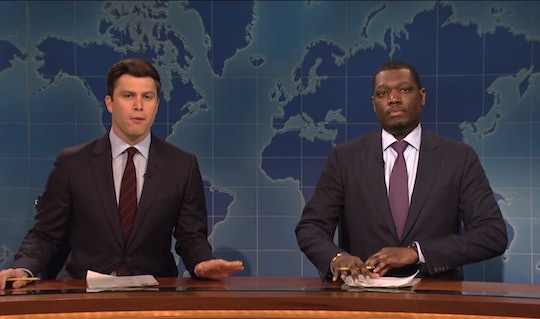 As the Time's Up movement continues to gain traction, it's become clear that there's still a lot of work to be done as far as advancing women's roles in the entertainment industry. In what some might consider a tone-deaf move, given the current climate, Saturday Night Live's Colin Jost and Michael Che will host the Emmys. That's right, not just one man, but two.

And Twitter isn't very happy about it. Throughout 70 years of Emmy Awards, just over 20 women have been invited to host the program. It's even worse than you might think, in fact, because the Emmys often have two or more hosts. Since its first broadcast in 1948, there have been over 100 Emmy hosts, according to IMDb. Even when a woman is invited to host, she's almost always paired with a man, starting with Lucille Ball and Desi Arnaz in 1951. All told, there have only been five Emmys without a male host: the 1993 ceremony, with Angela Lansbury; 1994's pairing of Ellen DeGeneres and Patricia Richardson; two more with DeGeneres flying solo in 2001 and 2005, and most recently, Jane Lynch in 2011.

DeGeneres' years, in particular, have been among the highest rated; in 1994, she and Richardson pulled in 21.3 million viewers. For context, that's just below what ratings juggernauts Seinfeld and Frasier pulled in that same week. At the time, it was the highest-rated Emmy broadcast ever, and it's only been beaten once, by Garry Shandling's 21.8 million in 1999. In recent years, the Emmys have been in a slump, pulling in just 11.3 million viewers in 2016 — an all-time low — and 11.4 million in 2017.

Considering the relative unpopularity of the Emmys broadcast in the past few years, some might find Jost and Che to be a puzzling choice for co-hosts. Both were plucked from the SNL writers' room for their current roles hosting the show's "Weekend Update" segment, and Che's has a 2017 Netflix comedy special.

Basically, they're not exactly household names, and therefore unlikely to draw in an additional 10 million viewers from last year's show.

Women in the entertainment industry and beyond are clamoring louder than ever for equal representation, with male allies backing them up.

Honestly, I'd be fine with Lynch or DeGeneres reprising their roles again this year; to be blunt, they've both made me laugh a lot more than... Well, some men.

And there's also no shortage of funny women who would kick butt hosting their first time around. Samantha Bee comes to mind right away. And if the Academy had its hearts set on a duo, what about Superstore's America Ferrera and Lauren Ash, or Jost and Che's co-stars, Kate McKinnon and Cecily Strong?

In a post last month, Jezebel details several incidents of Che reacting negatively to criticism from women writers, including social media rants, name-calling, and in one case, posting a woman's email address in what appeared to be encouragement for his fans to contact her directly. A representative for Che did not immediately respond to Romper's request for comment.

Others just don't care for the duo's brand of comedy, or their ability to work together.

What's done is done, though, and it's doubtful that any amount of hate-tweeting will convince the Academy to recast the hosts after they've already been announced. But perhaps Academy members will take the public's reaction into account when it's time to make their casting decisions for future shows. Is it too soon to get #AllFemaleEmmys2019 trending?