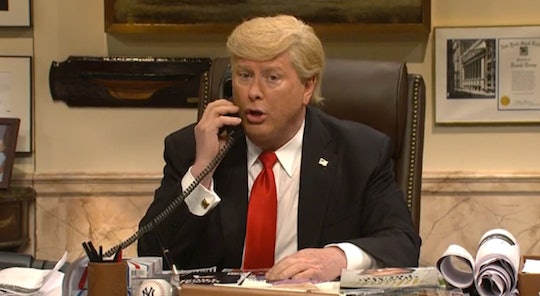 Presumptive Republican nominee Donald Trump provided the comedy world with a lot of fodder this week, and Saturday Night Live gleefully used it. The show's cold open mocked everything from Trump's sexism to his habit of pretending to be his own publicist. And yet, while the SNL Donald Trump cold open was ridiculous, it still wasn't as ridiculous as real life.

Let's review the week in Trump. First, the former reality TV star made headlines when it came out that he had masqueraded as a publicist to talk himself up over the phone to various reporters, most of whom knew immediately that it was him. Then, The New York Times published a blistering account of Trump's poor treatment of women, drawn from 50 damning interviews. And through it all, Trump has been slowly narrowing down the shortlist for his vice presidential pick.

So SNL had plenty of material, and used it well. The show opened with Darrell Hammond's Donald Trump on the phone with a reporter, claiming to be a publicist named Joey Pepperoni, and vigorously asserting that Trump was "the real-life inspiration for Iron Man." Soon, Bobby Moynihan showed up as notable Trump supporter (and potential hostage) Chris Christie, ready to help Trump pick his running mate.

Christie ran through a bevy of possibilities, from Jeb Bush (about whom the two men immediately burst out laughing) to Carly Fiorina, who Trump dismissed as "a B-cup, tops." When Christie proposed a "guy from a swing state, Florida, who’s half-Hispanic and has a proven track record of sticking up for himself," Trump assumed he was talking about George Zimmerman instead of Marco Rubio. (Zimmerman, of course, made plenty of headlines this week too, with the lose-your-faith-in-humanity news that he was auctioning off the gun used to kill Trayvon Martin.)

When Trump made his own suggestions, from John Kasich to Ted Cruz, Christie promptly responded that none of them were interested. And as for Paul Ryan? "He said not right now, but he'll see you in hell."

But though he may have prepared a long list of possibilities, Christie had only two men he really wanted to suggest for the job. One, of course, was himself. The other was his noted man crush Bruce Springsteen. "He's a Democrat," Trump replied, to the suggestion. "He's a god!" Christie screamed back.

Finally, Christie dropped all pretenses and poured his heart out, saying, "You are such a special candidate. And maybe, just maybe the person you have been looking for the whole time is standing in this room right now."

Trump agreed, and looking past Christie, asked Jay Pharaoh's Ben Carson if he was up for the job. The neurosurgeon and erstwhile candidate certainly was.

Now we'll just have to wait and see who Trump ends up selecting in real life. In the meantime, watch the full sketch here.