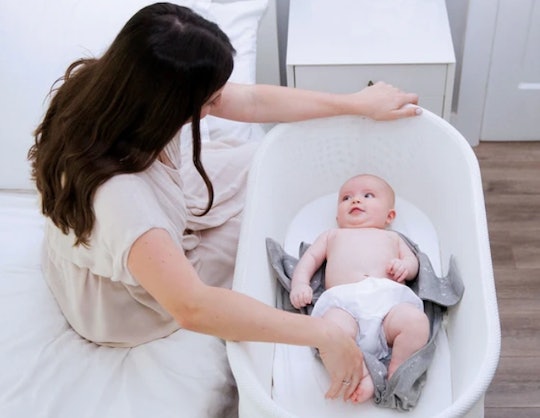 Our favorite newborn sleep doc isn’t simply shushing and soothing our babies to sleep anymore. He may be saving their lives.

Harvey Karp, co-founder and CEO of Happiest Baby, worked with his company and an industrial designer from MIT for six years to test and develop a bassinet that can help babies sleep while preventing SIDS. The SNOO Smart Bassinet hit the market in 2016, and now the FDA is expediting its examination of the SNOO as a potentially lifesaving device capable of preventing SIDS and Sudden Unexplained Infant Death Syndrome (SUID) by keeping babies in a safe back-sleeper position. The SNOO sells for $1,295 or rents for $118 per month.

After 75 million hours of logged sleep in the SNOO, there hasn’t been a single reported injury or death, according to the Consumer Product Safety Commission. Comparatively, there were about 1,400 SIDS deaths in 2017 in the United States, for a total of 3,600 SUIDs deaths that year, per the CDC.

The bassinet responds to a baby’s cries with increased motion and rocking, resulting in an average of one to two hours more sleep per night for the baby, according to internal data from an ongoing study by Happiest Baby.

“SNOO is not a baby bed, it’s a caregiver, it’s your older sister who moved in and rocks the baby,” Karp says. “The bed responds and puts the baby to sleep.”

This could be potentially lifesaving, he argues.

When parents are waking up multiple times due to a fussy baby, they are more likely to do something intentionally or accidentally unsafe. And while back sleeping is the safest position, it doesn’t necessarily lead to the best sleep, Karp says.

So after all the wakings, parents may give up on the ideal safety conditions in order to get more sleep for everyone involved. This may mean bed-sharing or moving the baby to his stomach.

Dr. Donald Middleton, professor, family practice, University of Pittsburgh School of Medicine, offered his support for further research into the device via a statement: “Maternal exhaustion can trigger postpartum depression and risky sleeping practices," he said. "But now there is new hope."

Since the SNOO decreases the number of night wakings, it could also lead to safer sleeping practices, Karp says.

It’s gained a cult following, with more than 11,000 *mostly* moms obsessing over the smart bassinet via a Facebook page dedicated to “Snoo Mamas.” More than 100 people post in the group per day. There’s even a Facebook group for Physician Moms using SNOO.

The SNOO is different from competitor models for a few reasons aside from its relatively high price and obsessed owners.

It’s able to keep babies on their backs the entire night thanks to the “Sleepea Swaddle” that attaches the baby to the bassinet. While the baby can move his shoulders and legs, he can’t flip himself onto his stomach. Nearly 50% of babies who die in their sleep are found on their stomachs — and stomach sleeping raises the risk of SIDS by 300-400% (the risk is higher if the baby is swaddled).

Karp has high hopes for the device and its inclusion in the FDA's "breakthrough device" program. “Doctors may never be able to prevent all of these deaths, but we believe that SNOO will help protect many babies and families from this tragedy,” he said in a Feb. 24 statement. “We look forward to working with the FDA and hope to gain the Agency’s clearance of SNOO as a significant step forward in the reduction of SIDS and SUID.”

Editor's note: The figure for annual SIDS and SUIDS deaths has been updated according to the latest available data. The number of hours of logged sleep in SNOO devices has also been updated.

More Like This
Here’s How Many Calories You Burn When Nursing
Why Does My Baby Cough While Breastfeeding? Experts Explain
20 Weird But Genius Health & Beauty Tools For Babies
Why Fewer Newborns Will Need Jaundice Treatment Under New AAP Guidelines