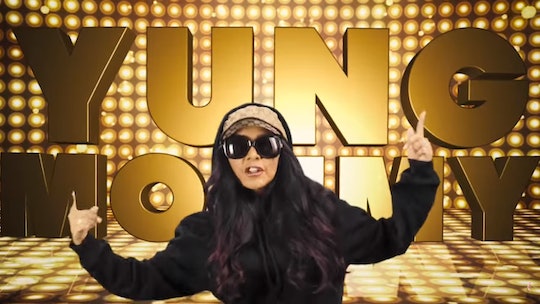 In today's "Hey, why not?" news, Nicole "Snooki" Polizzi, former star of the MTV reality series Jersey Shore, has released a music video, because of course she has. But this is no vanity project; as she explained on her YouTube channel, "Don’t take it too seriously — it’s just meant to be fun and funny, so I hope you enjoy it!" Take it with a grain of salt, and Snooki’s hilarious and strange video about motherhood is actually pretty entertaining, even though viewers will likely curse her once they find themselves unable to stop humming it hours after watching.

The track begins with a quick review of how Snooki got to where she is: her wild beginnings partying with "JWoww, Sammi, and Ronnie" (no mention of Pauly D or The Situation? Ouch!), and how she's grown now, married to Jionni LaValle, with two kids who "call me mommy." Oddly, even her rapping is auto-tuned, as she references baby food and potty training and her toddlers guest star in the clip. "Stretch marks!" she croons. "Saggy nipples!" Well, alright, then. The aesthetic is fever dream meets day care, as rainbows and plastic dinosaurs fly across the screen, and Snooki's disembodied head floats in the air. It's hard to tell if she's 100 percent in on the joke, or just 75 percent.

Fans who grew up watching Jersey Shore and are now in a more mature stage of life will no doubt find the video relatable. Snooki's traded in red Solo cups for strollers, but she hasn't forgotten her leopard-print roots. And there's no denying that she parlayed her fame into better things than some of her costars; Angelina Pivarnick and Deena Cortese both appeared on VH1's depressing trainwreck Couples Therapy, according to Life & Style, for example.

Snooki, however, leveled up by appearing on Season 17 of Dancing With the Stars, impressing judges even though she was eliminated early on. She's also reportedly made tens of thousands of dollars in appearance fees; Rutgers University paid her $32,000 to instruct their students to "study hard, but party harder" in 2011, according to Forbes. In addition, she's published a memoir and three novels, to not-so-hot reviews. But it seems that she's finally found her niche with her YouTube channel, which boasts more than 404,000 subscribers, the proceeds of which Snooki credits with covering the costs of her kids' food. Seems like a pretty sweet gig. Now if only I could get that damn song out of my head.