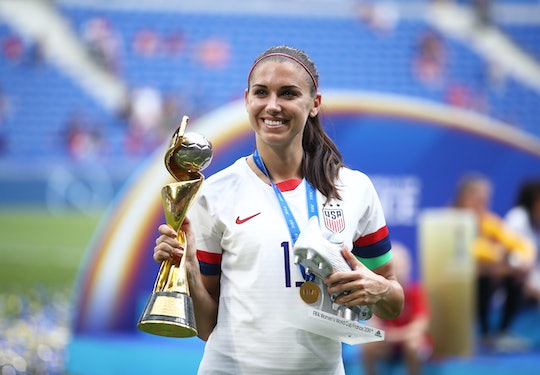 It looks like congratulations are in order for one famous athlete couple. And I'll give you just one guess as to the theme of their future nursery — that's because soccer star Alex Morgan is pregnant with her first child with husband and fellow soccer player Servando Carrasco. And needless to say, their double-whammy pregnancy/sex reveal announcement is seriously sweet.

Just to jog your memory, Morgan is a forward for the Orlando Pride and U.S. women's national soccer team. You know, the team that kicked *ss and took names at the FIFA Women's World Cup in France over the summer? Oh, and her husband is an MLS player. (Talk about good genes, right?) Anyway, the couple announced on Wednesday that they are expecting a baby girl this coming spring, People reported. “We are so overjoyed to grow our family,” Morgan told the publication. “She’s the best World Cup gift I could have asked for.”

The mom-to-be also took to Instagram on Wednesday to share the big news. "We are already in love and we haven’t even met her yet. Newest member of the Carrasco family, coming soon," she captioned a series of photos. In the main carousel shot, the couple is smiling at a beach while Carrasco has one arm around his wife and a baby body suit in the other hand that reads, "Ready or not." A beaming Morgan is also holding a chalk board that reads "Baby girl, April 2020."

Based on the comments, I think it's safe to say the soccer champ's Instagram followers are over the moon for her. One Instagram user wrote, "Thrilled about the news. The world needs more powerful women (like you). Congrats to the family!!"

Fellow U.S. women's national soccer player Andi Sullivan wrote, "SO HAPPY FOR YOU BOTH! This is too beautiful."

Yet another Instagram user pointed out, "Timing works out to be right after the World Cup win..." alongside clapping emojis.

Meanwhile, Carrasco shared his own pregnancy announcement on Instagram, according to E! News. "Can’t wait to meet my baby girl," he captioned a photo of himself, Morgan, and their two dogs. In this shot, the father-to-be is holding a chalk board that reads, "Adding 1 more to the fam ... April 2020 Baby Girl." The canines are wearing bandanas that read, "Baby human coming April 2020," and "I didn't sign up for this." (LOL. Well, at least one of the pooches seem to be thrilled about getting a "baby sister.")

Morgan and Servando have been married since 2014, according to Today. Back in June — ahead of the U.S. women's national soccer team win at the World Cup — Servando sang his praises for his wife.

"I love her for the person she is, and what she accomplishes is almost secondary to that. Of course, I'm proud of her, there's no doubt about it. When my nieces talk to her and they look up to her, that's as good as it gets," he told MLS Soccer. "I mean, the soccer stuff, yeah, for sure, cool. But to see her on the '100 Most Influential in the World' in Time magazine? I'm like, damn. She's making a difference."

Whether the pregnancy was the result of a perfectly-timed "goalie" removal (sorry, I had to,) or just a little too much celebration following the World Cup win, Morgan is clearly over the moon about her impending motherhood. It's probably safe to assume, too, that soccer is going to be a major part of her baby girl's life. Congrats to the parents-to-be!