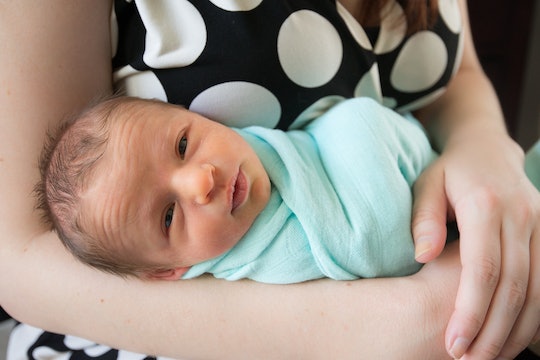 Why New Moms Need To Know The Whole, Ugly Truth About Breastfeeding

Here are some things that are true about breastfeeding: It's natural, it has lots of health benefits for both mothers and babies, it helps moms and newborns bond, doing it successfully can make you feel like freaking superwoman. But, as any mom who has tried feeding her little one this way can tell you, it's definitely not all puppies and rainbows. But in the haste to compel moms to at least give it a try, some experts drill down on the benefits and gloss over the considerable challenges. At worst, society basically talks to breastfeeding women like children, as international news editor for the British newspaper The Guardian Lizzy Davies wrote in an op-ed published Tuesday — and she absolutely has a point.

Davies wrote the piece from her perspective as a new, breastfeeding mom, and her argument is simple: Let moms know what they're getting into so they can be prepared, so they don't feel alienated and like failures when their experience is less than sublime. Because, yes, the many perks of breastfeeding include its being easier on the wallet than purchasing formula, for example, but it also can be "supremely bloody painful," as Davies knows from her own experience breastfeeding her own baby daughter.

Davies' own breastfeeding struggles inspired her to write the refreshingly honest op-ed. In it, she recalled watching a how-to video in which the baby latched on effortlessly and learning about a serene-sounding laid-back feeding position. Instead, here's what she found herself faced with soon after her daughter was born in April:

A procession of midwives – all of them kind, all of them determined to show me just how straightforward nature can be – grapple with my baby’s head and my nipple and try to bring them together in perfect harmony. It does not work. I spend my daughter’s first evening on earth painstakingly squeezing out tiny droplets of colostrum into a minuscule syringe. It is only the next day that, infuriated perhaps by my increasingly cack-handed attempts, she eventually complies.

Moms, Davies argued, are too often led to believe that nursing will be "easy, painless and emotionally blissful." They find out the hard what that this is a gross mischaracterization of the entire institution of breastfeeding. "Are we so intent on [infantilizing] women that we won’t tell them the truth?" Davies asked in her op-ed. "... Women need to know of the cons of breastfeeding as well as the pros, so that they are better prepared for the potential challenges ahead."

Davies is far from the only person who feels this way. Writing for Babble, Arianne Segerman succinctly summed up the problem: "We want people to breastfeed SO BADLY we feel like telling them of the hard stuff will make them bolt." It's no secret that breastfeeding rates in the United States aren't where they could be (and the same is true in Britain, Davies pointed out), and that medical professionals are always looking for ways to boost the number of babies who are fed this way. But withholding information from new and soon-to-be moms is not the way to go about convincing them that they should do what so many of their peers don't.

So, women should be warned that committing to breastfeeding could force them to adhere to new dietary restrictions, limit a woman's freedom, make her partner feel left out, and lead to conditions like plugged milk ducts and mastitis, according to Verywell. Still, these moms, Davies wrote, will probably still be up for the task if they feel it is the best choice for their babies: "...they have just given birth; they are not easily scared off. ... tell them the truth and you might just be surprised."

More Like This
A New Survey Shows 74% Of Women Would Drain Their Savings On Maternity Leave
Why Does My Baby Cough While Breastfeeding? Experts Explain
Everything Parents Need To Know About Monkeypox
I’ve Learned A Lot Raising Black Multiracial Children. Here’s What I Want Fellow Parents To Know.