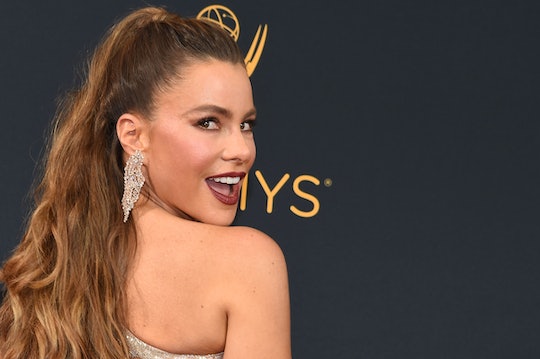 Sofia Vergara Is Being Sued By Her Frozen Embryos, & Here's Why That's Not OK

One of the stars of the hit show Modern Family is having some real-life family drama this week, but it actually has to do with family members that don't even exist. In what sounds like a wild plot taken straight from the show, actress Sofia Vergara is being sued by her frozen embryos. Here's some science to explain how that's even possible.

Vergara's situation is actually pretty complex: like many women, she chose to freeze some embryos with a former partner, Nick Loeb, several years ago. When the couple split in 2014, the fate of the two, female, cryopreserved embryos — which were being stored at a fertility clinic in Beverly Hills — came into question. Last year, Loeb filed a suit that was meant to prevent Vergara from destroying the embryos, which he claims he has rights to (even though they came from Vergara's body). His suit actually requested that he be granted full custody of the embryos, which he named "Isabella" and "Emma," according to Today.

In situations where a couple has frozen embryos together, then split up, it's not unusual for the embryos to be donated or destroyed, according to Live Science. Loeb, who is not pro-choice, said in his statement when the suit was filed that he never agreed to the destruction of the embryos — which he says violates his personal views, according to InTouch. Loeb set up a trust for the embryos, in the state of Louisiana, since that state actually has laws that grant an embryo the ability to sue. That law goes so far as to say that "An in vitro fertilized human ovum as a juridical person is recognized as a separate entity apart from the medical facility or clinic where it is housed or stored."

What Is An Embryo, Exactly?

In the case of in vitro fertilization, an embryo is an egg that has been fertilized by sperm and is ready to be implanted into the womb. An embryo, then, is not the same thing as a fetus. In the course of a pregnancy that occurs naturally, the term embryo isn't used until around the fifth week after conception has occurred, when the internal organs have begun to develop. The term fetus isn't used until around the 10th week of pregnancy, at which time the embryo has become more fully developed, often with genitals. The term fetus is then used for the remainder of the pregnancy when describing its development.

In the case of IVF, eggs are fertilized manually in a laboratory and therefore the period embryonic development is slightly different, and each stage of "grading" determines how viable the resultant embryo will be for a future pregnancy. Once the eggs have been fertilized, they can be cryogenically frozen so that they remain viable for years until a woman decides she's ready to get pregnant. A woman might decide to have her eggs "frozen" even if she doesn't have a partner. Many single women choose to freeze their eggs so that if they remain single beyond their most fertile years, they'll still have the chance to get pregnant. If she decides to get pregnant but doesn't have a partner, she may have her eggs fertilized with donor sperm.

Do Spouses Have Rights In IVF?

A sperm donor has no rights regarding or obligations to a child born of their donated sperm. In most cases, the sperm donor's identity is kept anonymous. In the case of informal sperm donation (where, perhaps, a woman's friend has offered to supply his sperm for IVF) it can be a little murky, so it's usually recommended that IVF procedures are done through doctor's offices or clinics that can provide protection for the sperm donor and recipient.

If a married couple goes through the IVF process, the question of who actually has rights to the embryos gets even more convoluted, and sometimes depends on the state the insemination occurred in. The rights granted to spouses depend a lot on the contract the couple signs before beginning IVF, wherein they decide what they want to happen to any stored embryos if one partner dies, or they split up. In Vergara's case, her ex-husband alleges that their agreement only laid out what should happen if one of them died — not if they broke up.

Those consent forms don't mean much if a couple gets divorced, though, because in the end embryos are joint legal property of the parents only if the couple was married at the time of the insemination, according to Women's Health. Single women are, then, the sole owners of their embryos.

Custody Battles Over Embryos Are Complex

In terms of custody battles over embryos, the court usually rules that embryos shouldn't be used without consent of both parties, even if they're no longer married. In part because to do so would enforce parenthood on a partner who is no longer interested and willing. This is an interesting parallel to the debate about abortion rights, which prioritizes the "rights" of a fetus to exist over a woman's rights and agency over her own body, and her interest or ability to parent.

But courts will also take the specifics of each case into account: a case in Pennsylvania back in 2012 concerned a woman who had frozen embryos after being diagnosed with cancer. Her partner had an affair, and had a child as a result of his infidelity, and the couple split. Later on, she wanted to use the embryos they had created to have a child — which she would not otherwise be able to do after going through cancer treatment. The court ruled in her favor because of the specifics of her case.

While in many cases it's the partner who wants to have the embryos implanted into their own body that instigates lawsuits like this, the one that Vergara is involved in was brought about by her male partner who can't have the embryos implanted into his own body. It's another example of how a woman's right to make decisions about her reproductive health are often put second behind the wishes of her male partner, or governments and institutions that seek to protect fetuses over living, breathing women.

Vergara's case illustrates once again the legal complexities tied to reproductive rights and a woman's right to have control over her own body (and the cells — not legally living beings — it produces). Amnesty International, which promotes human rights all over the world, takes the stance that it is a human right for women to make choices about their sexual and reproductive health. No woman should have choices about what to do with her body dictated to her by third-parties, especially highly personal choices regarding reproduction and motherhood.

Loeb's argument — that he should have access to the embryos, and be allowed to parent them even if Vergara isn't involved — certainly goes against the general consensus that both parties involved in the creation of the embryos must agree on what is done with them. Loeb, having written a NY Times op-ed about the situation last year, has kept the argument high-profile, despite the fact that it's a decision that should only be made between himself and Vergara. And since Loeb cannot physically carry the embryos himself, a third person — perhaps a surrogate — would need to be brought in, further complicating the legality of the situation.

Just because the law states that both parents should have equal rights when it comes to the fate of the embryos doesn't mean it necessarily makes sense when the situation has become so convoluted. What it really comes down to is that a womb is needed in order to actually furnish a life from the stored embryos. Loeb shouldn't have the right to put embryos created with Vergara's eggs into a womb other than hers anymore than Vergara would have the right to be impregnated with the embryos created with Loeb's sperm if he didn't consent to it. Loeb's personal beliefs about choice, and the beginning of life, don't exempt him from the law, which clearly states that both parties have to consent. He has no more right to her embryos, just because he wants to them, than he would have the right to harvest one of her kidneys.

Vergara's case is just another example of why consent in any situation between two people, especially sexually and reproductively, is important and should be respected, no matter what.