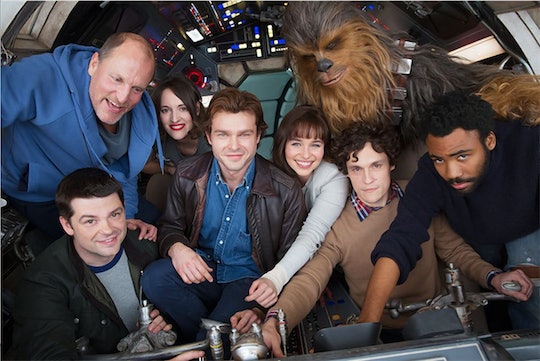 We Finally Learned Where Han Solo's Name Came From In 'Solo'

Warning: slight spoilers ahead! If you have yet to see Solo: A Star Wars Story and are avoiding spoilers at all costs, I highly suggest you find something else to read ASAP! But if you're down to find out and discuss Han Solo's name origin, which is finally revealed in the standalone film, then by all means, keep reading! There are a lot of things that go down in Solo: A Star Wars Story that none of us saw coming, but one of them just so happens to be the origin of the name of one of the biggest characters in the entire franchise! Yes, we finally find out where the name "Han Solo" comes from.

Han, who is played by Alden Eldhrenreich in this film, only goes by "Han" throughout the beginning of Solo. Without giving too much away, it's not until Han arrives to sign up for the Imperial Academy that he's given his infamous last name. The academy officer signing him in asks Han for his name, and his response is: "I don't have people. I'm alone." The officer surprises us all with a clever response by giving Han the last name "Solo" because he's, well, solo. After over 40 years of fans wondering where Han's name came from, it all comes down to one quick, simple moment in his new standalone film. Wild, right?

Diehard fans have long theorized that Han's unique last name, Solo, was a name the thief-turned-pilot gave himself. Even Luke Skywalker has been curious about Han's name, as reported by Bustle in 2017. The outlet points out that Luke previously wondered about Han's name in the Return of the Jedi storybook, which was published in 1983. In the same report, it's suggested that Han only ever had one name until he decided to "choose" Solo as a last name. Why would he do that, you ask? Because he was known for being a loner of sorts, and declaring himself as "Solo" was a way to assert his independence. Plus, "Solo" was a cool enough name to provide him with a little bit of street cred. (They have streets in space, right?)

Fans have been patiently awaiting the reveal of Han Solo's name after Disney CEO and Lucasfilm president, Bob Iger, confirmed it would be a part of Solo: A Star Wars Story. "That picks up with Han Solo when he was 18 years old and takes him through when he was 24. There are a few significant things that happen in Han Solo’s life, like acquiring a certain vehicle and meeting a certain Wookiee that will happen in this film. But you will also discover how he got his name," Iger said during a lecture at the University of Southern California, as reported by ComicBook.com.

Reddit is riddled with fan theories about Han's name, too. Many of them played the guessing game of what Han's real name might be. Some of the names that were thrown about were Goin, Greedo, Dash Render, and others. It's unclear which of these Reddit user suggestions were just fun jokes and which were serious. However, some also suggested that his real name could be Ren -- just like his son, Kylo Ren. Unfortunately for all of the fans who have put so much thought into Han Solo's name, the truth is it's just a simple add-on courtesy of a clever officer.

Make sure you see Solo: A Star Wars Story when it hits theaters on Friday, May 25. It's the perfect way to pre-game all of those Memorial Day barbecue's -- or a second option if the weather isn't exactly ideal for outdoor activities.