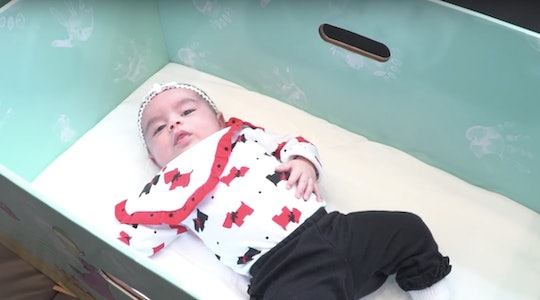 Are Baby Boxes Really A Life-Saver?

To combat the ever-present threat of sudden infant death syndrome (SIDS), a trend some believe to be life-saving is growing across the country: Baby Boxes. Specifically, the Los Angeles-based Baby Box Co. has teamed up with Ohio, New Jersey, and Alabama to provide every infant born in those states with the portable box meant to serve as a sleep space, along with a whole host of other goodies — provided their parents complete some education training about safe sleep practices for newborns. But some medical professionals and other experts are claiming that, in general, baby boxes don't live up to the hype, considering that they are largely unregulated.

In order to receive their free Baby Boxes, parents in the participating states simply need to head over to the online Baby Box University. After watching videos about SIDS, which is one cause of the sudden, unexpected infant deaths that kill 3,500 babies every year, and completing a quiz, they can get a box free of charge, according to NPR. The box itself is portable and features a firm foam mattress and tight-fitting sheet.

By many accounts, it's an innovative program with the potential to reduce infant mortality. Others are a little more skeptical, expressing concern that the boxes themselves don't have the testing they should.

"There is a perception out there that if people sell it, it must be safe," Dr. Rachel Moon, who's the chair of the American Academy of Pediatrics' Task Force on SIDS, told USA Today. "There is no regulatory commission, anything, to look at this box and bless it."

While plenty of baby box companies tout the benefits of keeping sleeping infants in their structured products, The Baby Box Co. specifically reports on its website that its products "meet or exceed all applicable tenets" of the Consumer Product Safety Commission (CPSC). But, as USA Today reported, the CPSC doesn't actually have mandatory safety standards for baby boxes. In a statement to Romper, the company clarified that it "voluntarily" underwent the testing required for bassinets. In Canada, the United Kingdom, and Europe, it said, the boxes are considered bassinets, although they are not in the United States.

Additionally, Dr. Thomas Hegyi, medical director of the SIDS Center of New Jersey, told USA Today he's worried about bigger babies, as the boxes are supposed to be a safe space for babies to sleep until they are six months old. If they then don't have much space to sleep, he wonders, will they then end up engaging in unsafe sleep behaviors?

In an email to Romper, Baby Box Co. CEO Jennifer Clary said that it's possible for a baby to outgrow the box, but said most are able to stay in them until they are five or six months old. She believes that the Baby Box is "equivalently safe to other reviewed infant sleep spaces." There are about one million Baby Boxes in circulation, she stressed, and no infant fatality or injury claims have been filed with the CPSC.

But while critics of the actual Baby Boxes themselves worry about their safety and effectiveness, The Baby Box Co. stresses that what's actually important is the education component. The boxes — as well as the essentials within, like breastfeeding accessories, a onesie, diapers, and wipes — function more as an incentive for parents to learn about how to ensure their babies always have a safe night's sleep. "It is not our physical product that has an impact on SIDS and/or SUID, but rather the integrated education model via which we distribute," the company wrote in its statement to Romper. "We have been consistently open about this reality and continue to be transparent in this regard."

It's imperative that parents learn about how to keep their babies safe while sleeping, using simple strategies like avoiding bed sharing and making sure babies sleep on their backs. As for the boxes themselves, evaluate all the available information before making a decision as to whether it's the best choice for your baby — and if you're sure that it's a good decision for your little one, make sure to go with a reputable company that's focused on safety, like The Baby Box Co.