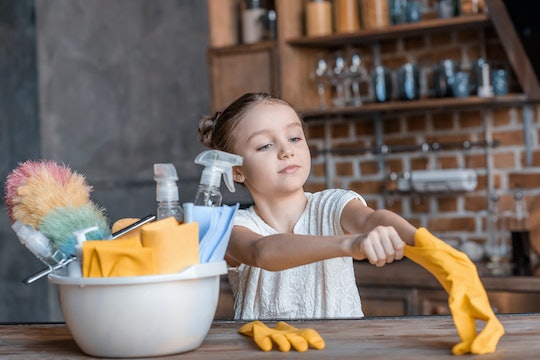 Study: Some Cleaning Products May Have This Surprising Impact On Your Children's Health

With flu season almost upon us, pediatricians stress the importance of hand-washing and sanitizing, so it makes sense that parents want to feel good about using common household cleaning products in their home to safeguard their families on a regular basis. Well, you may want to have a closer look at which ones you're using because, according to a new Canadian study, some common cleaning products may have a surprising impact on your children's health.

New research published in the Canadian Medical Association Journal made a link between household cleaning products and the possibility of children becoming overweight, according to findings published by Newsweek. Researchers who were part of the Canadian Healthy Infant Longitudinal Development (CHILD) group found in the study that kids who lived in households where disinfectants were used at least once a week had a higher body mass index (BMI) by age 3 than children who came in less regular contact with such products.

On the other hand, children who came from homes where eco-friendly products were used for clean-up (including such substances as vinegar) were less likely to be overweight, as Newsweek detailed.

While this link existed in households using "multi-surface cleaners," according to MSN, the association between cleaning products and increased BMI levels was not there when a household reported using natural detergents and eco-friendly cleaners.

Scientists arrived at the surprising connection by studying the gut (intestinal) flora of 757 babies aged between 3 to 4 months old, according to Fox News. The children’s fecal samples were collected at the start of the study, to reveal the bacteria which lived in their guts. Researchers also asked parents how often cleansers were used, and visited residences to check on product usage, according to a press release for the study shared on Science Daily.

In particular, children frequently exposed to disinfectants had higher levels of the Lachnospiraceae family of bacteria in their guts than other participants. Mice with higher levels of Lachnospiraceae in their gut stored more fat and had greater insulin resistance, as Dr. Anita Kozyrskyj, a pediatrics professor at University of Alberta, who led the study, told Newsweek. The bacterial composition of a child's gut is tied to important functions from postnatal intestinal development to nutrient absorption, according to the National Institutes of Health website.

In the new study, according to Science Daily, scientists reassessed these children at the age of 1 and 3 years old, and measured their weight. The conclusion? Disinfectants may mess with a child's natural gut bacterial balance. This thesis dovetails with findings from the past two decades, the authors concluded, that harsh chemical cleansers can affect the body. In fact, according to the Organic Consumers Association website, chemical cleaning ingredients have been linked with hazards big and small, from respiratory irritation to cancer.

However, as Dr. Kozyrskyj told Newsweek, this new study may have been hampered by the reliance on parents reporting their disinfectant use, and not noting brand names of items they were using. Also, the expert noted, it's possible that "the mothers who used eco-friendly products during pregnancy had more nutritious diets and a healthier pregnancy. As a result, their healthy microbiome was passed on to their newborns.”

For some time, natural-health advocates, including You Tube's Dr. Josh Axe, have been voicing the idea that some household cleansers, such as bleach, may be dangerous, and can be easily swapped for natural ingredients, such as lemon and various essential oils.

Meanwhile, Cosmos reported related findings by epidemiologists Noel Mueller and Moira Differding, who confirmed there was a “biologic plausibility to the finding that early-life exposure to disinfectants may increase risk of childhood obesity." When the findings cam out, Dr. e r Cecilie Svanes explained to the Unviersity of Bergen:

Moral of the story? The safest way to clean your house may just be the old-fashioned way your grandma might have done: soap, a cloth and a bucket of water.