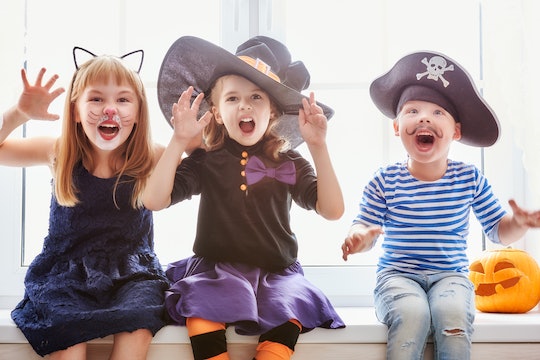 Everyone's favorite day to dress up and binge on candy is going to be a little less fun during school hours for some kids this year. That's because a number of elementary schools aren't letting students wear Halloween costumes to school events for reasons of inclusion. As holiday events across the United States, and one reported in Canada, are being cancelled, parents have been expressing their feelings about it.

One such school in Waukesha, Wisconsin reportedly sent a newsletter out to parents saying that the school would not be celebrating Halloween at all. The reason given by Hillcrest Elementary School officials, according to theWashington Times, was reports of some students feeling left out. The newsletter sent out by the school explained it this way:

We want to be inclusive of all families including those families who don’t celebrate Halloween or find purchasing a costume a hardship.

Similarly, concerns over inclusion led Ecole Sage Creek School in Winnipeg, Canada to replace Halloween celebrations with "Tie and Scarf Day," allowing children to still dress up to some extent, but without making the celebration tied to a specific holiday, according to CBC News. Along with worrying that some students would feel left out, there were also concerns here that students were dressing in frightening costumes that disturbed younger students, the outlet noted.

Here's what some people have said about schools banning the holiday:

Although the schools did indicate guidelines for appropriate costumes, there were sometimes students who didn't follow those guidelines. There was a discussion with those students about their costumes being inappropriate, and sometimes the students and the parents didn't agree with the view of the school.

In another similar situation, parents of kids attending Armijo Elementary School in New Mexico's South Valley were sent a letter explaining that this school, too, would be passing on the festivities, according to local news station KRQE. But unlike the parents at Hillcrest and Ecole Sage Creek, Armijo parents were reportedly not even given an explanation for why there would be no Halloween this year. The letter, according to KRQE, just announced that the Halloween parade was cancelled, same for any classroom Halloween parties. According to SFGate.com, the full letter sent to parents read:

Our Fall Celebration on Oct. 31 has been cancelled. Our school’s Instructional Leadership Council has decided that classrooms will not have parties. Please do not send your child with any snacks. In addition, students are not allowed to wear costumes to school. Thank you for your understanding.

Suffice it to say, some parents weren't pleased by the news. "[The letter] just said some council decided to take it away, it wasn’t even the PTA," Destiny Salazar, a Hillcrest mom, told KRQE. "We weren’t even notified or had a vote to get it taken away. I know my kids are really upset and hurt, and I know a lot of other parents are upset."

Hillcrest parents aren't the only ones that have bee upset by schools doing away with Halloween celebrations. After a number of schools in Milford, Connecticut decided to end their Halloween celebrations a few years back, parents and community members started a petition to fight the trend, according to Scary Mommy.

Striking a balance between enjoying the best parts of a parent's own childhood and taking into consideration the needs of other students at school is tricky. While cancelling holiday celebrations outright might not be the best answer, ignoring the concerns of younger and minority students isn't the solution either. Hopefully schools can find way to make everyone happy in the future. But for now, these students will have to be satisfied with the spooky activities offered off school grounds.