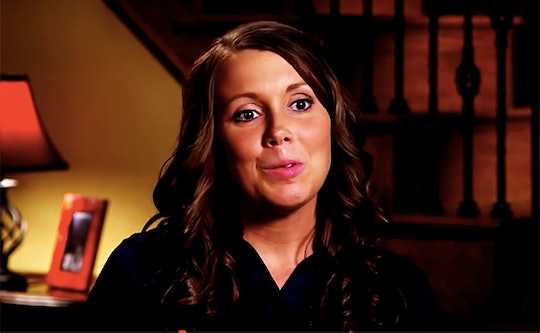 Counting On alum Anna Duggar is the mom to five kiddos: Mackynzie, 8, Michael, 7, Marcus, 5, Meredith, 3, and Mason, 10 months. But fans seem to think that total might increase in the coming months because some suspect Anna Duggar is hinting she's pregnant, according to Hollywood Life. The speculation kicked off on Labor Day after Duggar shared a photo of herself in a potentially *interesting* outfit.

It's no secret Duggar adores being a mom. The former reality star often shares photos to Instagram of her kids participating in activities she lovingly orchestrates, like the time she turned snack time into a moment of creative play. Or what about the time she took to her children for a fun visit to Chip and Joanna Gaines' Magnolia Market in Waco, Texas? It's clear Duggar works hard to give her kids the best lives possible.

Considering Duggar is all about being a mom, it's no surprise that people suspect she may want to have another some day. As for the evidence with this latest batch of rumors? Look no further than this photo Duggar shared on Labor Day. "Hope you are having a #HappyLaborDay and spending it with ones you love most!" Duggar captioned a shot of herself with her family posing on hay bales, according to Instagram. "We spent some time with family & friends at #FarmlandAdventures today!"

Although the snap might seem innocent on the surface, a few people think Duggar sent fans a low-key hint about her baby plans via her outfit. Apparently, according to fans on Reddit, the ensemble is Duggar's go-to maternity dress.

The rumor mill kicked off after a Redditor created a post in the Duggar Snark forum titled, "Speculation: Anna wore this dress while heavily pregnant with Mason. Could Band-Aid Baby #2 be on the way?"

"I think she’s pregnant, yes it’s sooner than her usual pattern but I think she was pregnant at Si’s wedding," one fan argued.

"Joy also wore this dress when pregnant," another commenter chimed in.

A person on the fence about the gossip said: "I can imagine it's comfortable when you're starting to show because it's not form fitting in the stomach area, but when do they ever wear anything that's form fitting, so... like others have said, it's not an actual maternity dress, it's just a dress from amazon." They continued, "But I mean who knows! I think she was wearing the same dress at some other event a while ago, and people were discussing the same question. She probably just likes it and it's comfortable."

Others, however, found the shot's set up to be more telling.

"I think she might be pregnant but not because of the dress she’s wearing," an observant fan noted. "Maybe this little photo shoot is a set up to make an announcement. She has been posting a bit more lately."

One fan penned, "I can see this going either way... BUT I can totally see this as a pregnancy announcement too. Something like 'boys outnumber the girls..."

Less speculative fans argued that the dress in question is not exclusively a maternity dress.

"I have this dress and I've never been pregnant! It's a comfy dress I usually wear on super hot days, or PMS-y days- sometimes even with something fitted over it to work (to play down the pregnant look it can give you lol). It's not my favorite look by any means," a Redditor pointed out.

"That's a very popular dress on Amazon, marketed as a non-maternity dress," someone else agreed.

Given the closes ages of Duggar's kids (each child is two years apart with the exception of Mason), I wouldn't be too surprised if she reveals a pregnancy within the next year or so, if more kids are in their future. That being said, I don't think you can speculate about whether someone is pregnant based off of a dress. If Duggar is pregnant, I'm sure she'll let fans know when she's ready.