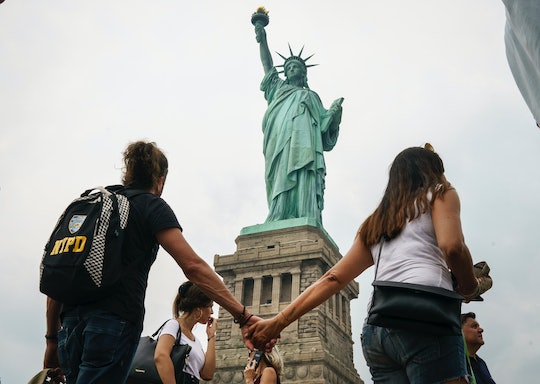 Trump Admin Makes It Harder For Some Kids Of U.S. Military Parents To Get Citizenship

A controversial "policy alert" issued by the U.S. Citizenship and Immigration Services (USCIS) on Wednesday has made it so some children of U.S. service members born abroad will no longer qualify for automatic citizenship. While the policy change will reportedly impact a small number of people, according to CNN, the alert has been met with backlash and uncertainties.

The USCIS' policy change, as The Hill explained, will impact three groups of people:

While CNN reported that it seems the policy change will mostly affect "naturalized US citizens serving in the armed forces who have not lived in the US for a required period of time, USCIS Acting Director Ken Cuccinelli issued a statement on Twitter to further explain the update. "The policy manual update today does not affect who is born a U.S. citizen, period. It only affects children who were born outside the US and were not US citizens. This does NOT impact birthright citizenship," he wrote.

Cuccinelli added that the update "doesn't deny citizenship to the children of US gov employees or members of the military born abroad. This policy aligns USCIS' process with the Department of State’s procedures for these children."

Previously, as The Hill reported, military personnel and other government officials stationed around the world were regarded as residing within the United States, meaning any children they had during this time were automatically granted citizenship under a portion of the Immigration and Nationality Act (INA). The new policy will go into effect on Oct. 29.

Romper has reached out to the USCIS as well as the Trump administration for further comment, but did not receive an immediate response.

The policy alert was met with backlash on social media, and Andy Blevins, executive director of the Modern Military Association of America, shared his concerns about the policy change in a statement to Reuters. "Military members already have enough to deal with, and the last thing that they should have to do when stationed overseas is go through hoops to ensure their children are U.S. citizens," Blevins told Reuters, adding that he's urging Congress to "ensure our military families don’t suffer the consequences of a reckless administration."​

Bradley Moss, an attorney specializing in national security, told The Hill that while this "changes nothing if you are a child born overseas to two U.S. citizens on a military base or just overseas in general," the updated policy is "aimed at preventing individuals who are either adopting a child who was born overseas to non-U.S. citizen parents or for kids or people who never really had any connection to the United States to shoehorn their way into citizenship."

Although the number of people that this policy change could impact is reported to be small overall, it's still a concerning move by the Trump administration. As Ur Jaddou of America's Voice explained to Axios, "It's a big deal because it is an attempt to limit the number of U.S. citizens who can transmit U.S. citizenship to their children because they have made the choice to patriotically serve their country in the military or other government service."

While there are still many questions to be answered regarding the reasons behind this policy alert, it's clear that, come October, the Trump administration has made it harder for some military families to obtain U.S. citizenship.