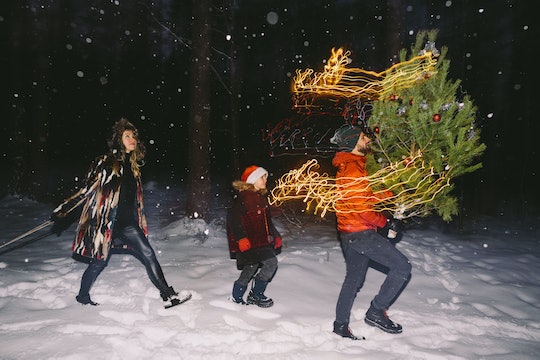 Some Parents Are Going To Extremes To Lie About Santa

Santa Claus. He’s a jolly old fat man who brings gifts and joy to children of all ages all around the world once a year on Christmas Eve. What's wrong with a guy like that? On the surface, the simple answer is “nothing.” There’s nothing wrong with the story of Santa and his magical powers of gift giving with the help of some elves, nine reindeer (if you include Rudolf), a top-of-the-line sled, and a supportive wife of 100 or so years. But dig deeper, and an honest — and probably sleep-deprived — parent may just open up to you and reveal the truth about the magic of Santa. Keeping his magical story alive this time of year is anxiety-inducing, time consuming, expensive, and downright exhausting! The lies parents tell their children to keep Santa magic and the Christmas holiday alive are elaborate and often taxing. But, at the end of the day (around 3 p.m. on December 25, to be exact), all of these worn-out parents will give you the same answer to the simple question: “Is it worth it?”

Then, these same parents will most likely fall face first into their pillows for a nice three-hour nap and thank their lucky stars that Christmas comes around only once a year.

So, why do they do it? Why do reasonable adults go to extreme lengths to keep the magic of Santa alive? “The world of pretend and believing in magic is just part of growing up,” says psychologist Jess Duran of California.

He’s right. Books, blogs, The Daily Mail, Slate, and even the New York Times has weighed the pros and cons of lying to children about Santa, and the conclusion is always the same: the pros of lying to children about Santa, and reindeer, and elves on shelves outweigh the cons every time. Children’s imaginations allow them to believe in Santa, the Easter Bunny, the tooth fairy and other pretend friends for a short period of their lives (until about the age of 8). Allowing kids to experience this world of innocence, magic and pretend is a rite of passage. There are a few years in a person’s life where their minds can truly believe in Santa. “Lying about Santa,” one of many New York Times articles state, is helping your kid, be, well, a kid. But, unfortunately, it’s just not as easy as one would hope.

“Keeping the magic of Santa alive has become more and more creative in recent years, as children have become more skeptical and have access to more information from their electronics,” psychologist Duran explains. “So I’ve seen parents do some pretty crazy things to keep the lie going for their kids.”

“I bought a five-hundred dollar Santa suit, got a Santa entourage, and rented a carriage to come to the house last year,” says Carl Higbie, a father of two from Connecticut. “Christmas is a big deal in our house.”

But what about the time and money and manpower to pull off such a Christmas feat? “The look on your child’s face when they believe the magic and fun of it makes it all worth it,” Higbie says.

Connor [her youngest son] asked me this morning why the elves haven’t moved for three days. I said I didn’t know and moved them when he went to school.

Other parents agree that it’s worth it, but tell it like it is: “They stress me out!” Allison Dunn, a mother of two from New Jersey, admits about her, not one, but two elves on a shelf. She finds herself waking up at 3 in the morning worried about the elves. Did she move them? Did her husband, who is actually the parent on elf duty at their house, forget to move them?

“Getting up in the middle of the night to move elves is pretty nuts. But I’ve done that. And we have two elves. We adopted a Bruins elf, a hockey elf, last year. And our original elf gave him some magic powers so he travels too, And they play together and keep each other company. They play hide and seek too.”

But it hasn’t been exactly easy for the Dunns while keeping the Elf on the Shelf Christmas magic alive either. In fact, there’s been some disappointment along the way. “Connor [her youngest son] asked me this morning why the elves haven’t moved for three days. I said I didn’t know and moved them when he went to school.”

Again, why are parents doing this to themselves? Isn’t it easier to just tell kids the truth? According to married celebrity couple Kristen Bell and Dax Shephard, telling kids the truth is more important, and less stressful, than lying about Santa.

In a recent interview with Us Weekly, Shephard admitted that he and his wife (who has played a Disney princess, no less) had already told their 5- and 3-year-old children the “truth” about Santa. This is how he justified such a horror:

“This is going to be very controversial. I have a fundamental rule that I will never lie to them, which is challenging at times. Our 5-year-old started asking questions like, ‘Well, this doesn't make sense, and that doesn't make sense.’ I'm like, ‘You know what? This is just a fun thing we pretend while it's Christmas.’”

Psychologists like Duran don’t agree with the Bell/Shephard approach necessarily. “There’s nothing wrong with lying to children about Santa,” he explains. “They will learn about the truth — at school, or through siblings or just by themselves — and it turns out fine. No one ever really feels betrayed. Actually, it's usually just a natural part of growing up.”

We hot-glued a piece of brown fur to a jingle bell and hid it in the fireplace ashes with a little bit of the bell showing through. We pretended to see something in there.

So, while some Hollywood couples are chilling by the fireplace with their kids talking about the truth and only about the truth, you have parents like Rachel Campos Duffy, a mother of eight, and a Fox contributor, going to elaborate lengths to keep her children under 12 believing in Santa. She also uses the holiday to reinforce her and her husband, Congressman Sean Duffy’s, religious beliefs. “Believing in Santa Claus is fun. Plus, we help them always remember that he was a saint: St. Nicholas. ... Knowing that Santa is a saint that you can pray to helps them believe longer once they can figure out that there is no Santa village in the North Pole. My kids know a saint can do anything.”

So, what’s the craziest thing the Duffy’s have done to keep the Santa magic alive? Believe it or not, it involved fire, fur, and a bell. Oh, and a fireplace, of course.

“We hot-glued a piece of brown fur to a jingle bell and hid it in the fireplace ashes with a little bit of the bell showing through. We pretended to see something in there. The kids were jumping up and down begging my husband to dig it out. When he did, their reaction was pure magic!” Campos Duffy says.

That stunt couldn’t have been easy. And, it wasn’t. “My mother-in-law had to help. And I needed a glue gun. … It took some time planning, but it was worth it! I still have the little thing in an bag in my jewelry drawer. Sean takes it out on Christmas to tell the littler ones of the story and how God and Santa left a little sign for our family so we always believe.”

They’re tired. They’re exhausted. They’re anxious. And they’re ready for the season to be over. But every parent who lies to keep Santa’s magic alive said the same thing to this Romper reporter: “It’s worth it.”

And what does dad Carl Higbie, a former Navy Seal, have to say to the celebrity couples and other parents who don’t go out of their way to keep the Santa magic alive? “F*k those parents! … They’re lazy, anti-American, and do not prioritize their kids!”

Now, if you’ll excuse him, he has something special planned for his kids this year to top off last year’s surprise Santa visit. “I have a horse-drawn carriage coming this week with Santa on his sleigh to read my kids’ Christmas list.”

Now, if he could only remember where did he put his phone to take some pictures? Let’s hope he’s not too exhausted to remember.