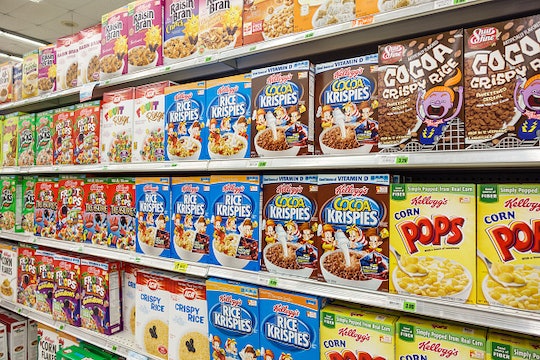 Some People Think This Cereal Box Is "Teaching Kids Racism"

Kids absorb everything from a young age. From the commercials they see on TV, to the text messages they see on their parent's phone, to reading anything that they can get their hands on — including their own cereal boxes. When kids are desperate for as much information and knowledge as possible, it is so important for them to be reading positive messages and interpreting them accordingly. In the most recent case that proves we need more of this, some people think that this cereal box is "teaching kids racism" and the evidence is worth seeing for yourself. Romper has reached out to Kellogg's for comment and is awaiting a response.

Novelist Saladin Ahmed found an interesting image when he looked on the back of a box of Corn Pops cereal — a crunchy, slightly sweet, corn-based cereal marketed towards kids — on Tuesday. The back of the box, according to USA Today, featured cartoon corn pop shaped characters in a shopping mall partaking in various super fun activities like skateboarding, shopping, and fountain bathing. But in the middle of the box, only one darker shade of the corn pops is pictured cleaning the floor — and it seemed a little weird to some.

In a tweet that has since gone viral, directed towards Kellogg's, the makers of Corn Pops, Ahmed had to ask if this was intentional. "Hey Kellogg's why is literally the only brown corn pop on the cereal box a janitor? This is teaching kids racism," Ahmed tweeted on Tuesday.

Ahmed has a point. Why couldn't the brown corn pop be partaking in other shenanigans, like walking on spoons or taking part of the corn pop pyramid? The actions and the color of the corn pop just don't add up — especially since that corn pop is the only corn pop that is a different color than the rest.

Ahmed followed up in another tweet, adding, "Yes, it's a tiny thing but when you see your kid staring at this over breakfast and realize millions of other kids are doing the same..."

The responses to Ahmed's tweets about the box aren't surprising. People are calling him out, claiming his question has classist undertones and that Ahmed is "making up issues." But there was one positive response to come out of Ahmed's tweet — a prompt response from Kellogg's, posted just hours after Ahmed posted the tweet.

In a tweet to Ahmed, Kellogg's wrote that they are "committed to diversity and inclusion" and will be updating and replacing the artwork in grocery stores. The company's response is admirable. Not only is it recognizing the perspective of someone who is offended by the drawing, but it's also recognizing that anyone, especially a child, could interpret a message from the drawing.

It is proven that kids are attracted to cereal boxes. A study conducted by the Food and Brand Lab at Cornell University in 2014 found that cereal box characters are meant to create a connection with consumers and create an emotional connection with the cereal box cartoons. Hence why your kid might want Trix or Cap'n Crunch (because the rabbit and captain mascots almost "speak" to them) over the cartoon-less Crispex or Honey Bunches of Oats cereals.

The solution? The study found that if parents don't want their kids going "cuckoo for Cocoa Puffs," they shouldn't bring their child down the cereal aisle at all. If researchers claim that kids are this strongly drawn to the front of cereal boxes and the characters that represent them, then who is not to say they're not going to interpret the messages on the back of the cereal box? As previously stated, kids' brains are like sponges — they absorb everything they see and read. The messages they get through all forms of media matter.

While it is up to interpretation as to whether the Corn Pops cartoon actually "teaches racism," kids are vulnerable to these kinds of cartoons and Kellogg's response to the tweet, which acknowledges this, is worth noting.