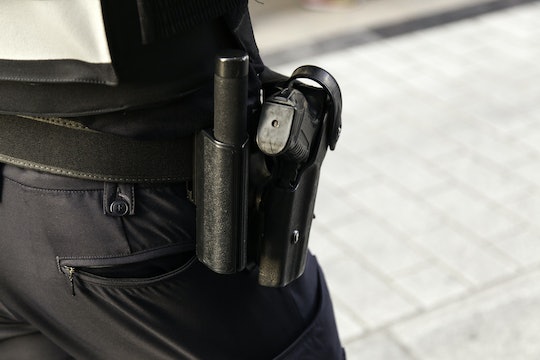 The topic of armed security or police in schools has always been one of great debate. Now, following some national push to arm teachers as well, after the Florida high school shooting, it's become more important for people to explore alternatives rather than continue to push guns into the classroom. Some schools want to replace security guards with therapists, and it's a huge step forward.

In Illinois, Fox News reported that lawmakers are looking to give extra money to schools, in order to replace armed security with unarmed social workers and behavior therapists. Rep. Emanuel "Chris" Welch proposed the plan, according to Fox News, after hearing from advocates who argue that investing in mental health resources is the best way of treating the epidemic of violence.

While the proposal hasn't officially become legislation yet, it would prove as a historical win for Illinois schools. The school-to-prison pipeline, which refers to a national trend of children funneled out of schools and into the juvenile and criminal justice systems, disproportionately targets Black and brown students.

Placing armed security, or police, in schools only exasperates the effect of the pipeline. According to the ACLU, Black students represent 31 percent of school related arrests across the nation. In addition to that, Black students are suspended or expelled at three times the rate of white students. The ACLU reports that students who have been suspended or expelled for discretionary violations are three times more likely to come into contact with the criminal justice system the following year.

There have been numerous reports about the violence Black students face at the hands of armed security or police in schools. In 2015, video surfaced of a Spring Valley officer tossing a girl from her desk; that same year, video surfaced of a Kentucky officer handcuffing an 8-year-old boy in his school, highlighting the intersection where disabled students can also face a unique level of violence. In 2016, students at Central High School in St. Paul, Minnesota staged a walk out after video surfaced of an officer macing a 16-year-old on school grounds.

In response, communities across the nation have been organizing to remove police from schools, and replace them with something better. Restorative Justice For Oakland Youth (RJOY) in Oakland, California, works to bring restorative practices into the community and the model has been adopted into Oakland schools.

Restorative justice is a way of looking at restoring relationships instead of simply punishing people. According to RJOY's website, an emerging approach to justice rooted in indigenous cultures, restorative justice emphasizes: repairing harm, inviting all affected to dialogue together, and giving equal attention to community safety, victim's needs, and offender accountability and growth.

In St. Paul, Minnesota, schools have begun implementing a restorative justice program. Originally piloted by six schools in 2017, the program is expected to see continued growth. In addition to transforming the culture of the school, restorative justice calls for bringing in professionals who are actually equipped to assistant students, including mental health staff and social workers.

A common response to removing armed officers is, "What about the safety of students?"

However, the purpose of providing students with restorative justice models and regular access to mental health professionals is to shift the culture. Armed officers don't solve the root of a problem; they can only react to an event that already exists. By providing students with more resources, schools are making a change to stop being caught in a reactionary period.

In 2015, Vox reported that more than one-quarter of American public schools have a daily police presence. They found that the more students of color, the more police a school would have; because poverty often correlates with race, Vox also reports that schools where more than 75 percent of students qualify for reduced lunch are more likely to have armed security on school grounds full-time.

The idea that poor, students of color are inherently more violent is what supports placing armed guards or police in schools. But, a 2009 study by Matthew Theriot of the University of Tennesse, found there wasn't much difference in serious crime between the schools that had SROs and those without. Essentially, students in policed schools were more likely to be arrested, but not to be charged with violent crimes.

Moving forward, it's important that in analyzing gun violence, students of color are remembered. Removing armed security from schools, and replacing them with other forms of care, is ensuring that this cycle of violence will end.