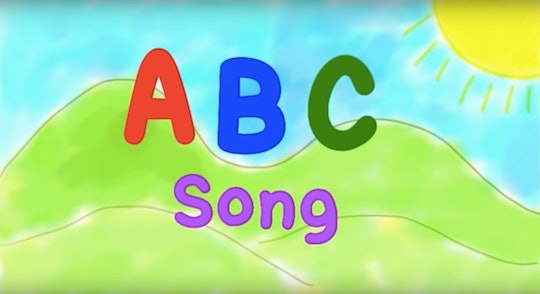 Someone Tried To Make A New Version Of The ABC Song Happen & Nope, Nope, Nope

Please allow me to apologize in advance for the bizarre experience you are about to endure. In yet another bastardization of all good things of childhoods passed, someone has remade the ABC song and let me tell you, people really aren't feeling it, even though its intentions seemed to be good. The purpose behind the remake, it seems, was to clarify that messy L, M, N, O, P part of the song, and while these letters may technically be a bit easier to understand, the overall effect is a bit, well, painful.

Screenwriter and producer Noah Garfinkel shared the news of the updated song — created by DreamEnglish.com, an educational website that focuses on grammar — on Twitter on Oct. 25, as BuzzFeed News reported over the weekend. His tweet quickly went viral and the reactions to the new rendition were starkly opposed to the changes and seriously hilarious.

"That was disgusting," one person replied. Another declared that "This new song does the opposite of whatever slaps is." LOL. "At first I just couldn't follow along after m, now I can't read," said another.

Yet another disgruntled listener chimed in to say, "You know what stresses me out the most? They could've just made 'W' sound longer instead of having to say it quick, leaving a stupid pause before it. This was necessary. But I just can't. Also, I will feel old when my kids tell me I'm singing it the wrong way."

My own sentiments were echoed in the tweet: "'They can pry the original LMNOP out of my cold dead hands." Same.

The OG ABC song has taught the alphabet to generations of children, myself included. The rhythm, the melody, the clear pronunciation of most of the letters — what more can you ask for in an alphabet song? Apparently someone, somewhere had asked for the letters L through P to be a bit more distinct, but I don't really think that person should get a say in things. But, hey, that's just me.

The muddled section of the alphabet that so many people have struggled to get through has made for some seriously adorable toddler renditions of the tune. I don't know about you, but I'm not quite ready to let go of the original song...

The original, classic ABC song was first copyrighted under the title "The Schoolmaster," by an American man named Charles Bradlee, according to The Conversation. You can even check out the song's original sheet music and lyrics online. But it looks like the song might actually go back a bit further than 1834. The site explains that it could even date back to the 1700s. And yet someone still decided that 2019 was the right time to tweak it. Hmm.

However — and bear with me here, people — there is an argument to be made for making the letters themselves a bit more clear. When learning the original song, it turns out that many children take quite a while to realize that "elemeno" is actually the letters L, M, N, O, according to Psychology Today. And despite this common confusion, parents tend to believe that once their child has memorized the song they know the alphabet. Unfortunately, recitation (no matter how cute) does not necessarily imply knowledge. And don't even get me started on the debate over whether letter name knowledge — that is, whether knowing the letter S is called "ess," for example — is actually important to learning to read and spell.

No matter the history or science behind the songs, the decision to play the old or the new version of the ABCs will probably come down to your child's preference. The original song is a staple in my house, with my daughter demanding that we sing "Abie See" at least 50 times a day. And when I attempted to swap that song out for the newer version this morning, I was first greeted with a confused look and then some very spirited demands for the song that was originally requested.

I'll leave it to you and your littles to decide if the latest adaptation is for you. But as for me and mine, we'll be sticking with mumbling elemeno P 'round here.