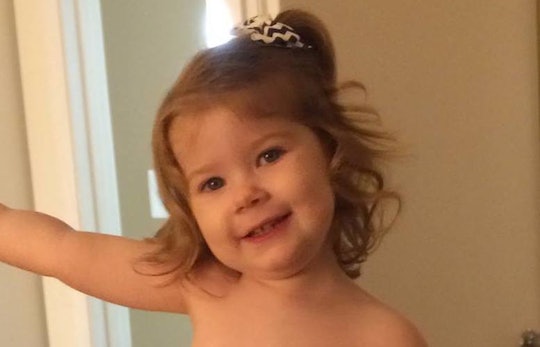 Someone Reported A Picture Of My Daughter On Facebook For Nudity

A few nights ago, my daughter was being hilarious. She dumped over two laundry baskets of clean laundry (that part was slightly annoying), and then she got on top of the baskets and did a little dance. Since both of my children tend to shed clothing when they're at home, she was wearing only underpants and some leg warmers. Of course while she was being charming and putting on a show, I grabbed my phone and snapped a couple of pictures. I captured one particular moment I didn't want to forget: her hands were splayed, and she had an angelic look on her face. I posted that picture to my personal Facebook page. It was viewable to my friends only. My only real moment of hesitation was when I realized I was showing the world my messy room.

Within 15 minutes, I got a notification that my photo had been flagged by someone as being "obscene" for "containing nudity."

My first response was shame. Like, holy sh*t, did I put an image on Facebook that was inappropriate at best and exploitative at worst? Did I share something that my daughter didn't consent to, because at 2-and-half years old she isn't old enough to understand that people are looking at her photo?

There are countless pictures on Facebook of my son without a shirt on, yet no one has reported him.

Then I looked at the photo again. I scrutinized it. Was there anything really wrong with sharing this photo with my friends? Sure, you could see her nipples. And she is wearing underwear and matching leg warmers. Maybe because they match, it looks like a lingerie outfit? Or something? Would it have been more acceptable if she still wore diapers?

While considering if the photo could be misconstrued as sexual, I was suddenly slammed by a wall of anger. Someone had looked at a picture of a 2 year old, saw that her nipples were exposed and that she was in underwear, and immediately felt that it was inappropriately sexual. That somehow child nipples (on a girl) are obscene.

I happen to be one of those people who thinks the distinction between adult male and female nipples is stupid. And I happily post breastfeeding pictures, even if there's some areola visible. Because, guys, I'm not being lewd. And they are just nipples. It hadn't even dawned on me that someone might draw that distinction between boys' and girls' nipples with children.

And, yes, I do see a distinction in how even very young boys and girls are viewed, because there are countless pictures on Facebook of my son without a shirt on, yet no one has reported him. There are pictures where he's not wearing anything. (Remember when I said my kids like to strip down?) As long as no genitals were showing, I've never felt uncomfortable sharing these photos. No on has ever flagged pictures of my son as inappropriate.

Our culture sexualizes girls at younger and younger ages. The clothes they wear are cut differently and feature objectifying phrases. The choices they are given at Halloween are different. There's the sheer existence of Toddlers & Tiaras. I realize it's a complicated issue without a clear solution, but maybe we should start with not sexualizing toddler "breasts." Maybe we should avoid sexualizing toddlers at all, because doing so is linked to a myriad of self-esteem and mental health problems.

I was also angry because the view of breasts as primarily sexual in our culture really bugs me. They can be sexual, but they are also utilitarian. They are part of what my strong, life-giving body can do. They are more than objects to be desired.

I was really conflicted about how to react to being reported. Perhaps the person who reported was legitimately concerned with my daughter's well-being. And regardless of how sh*tty that makes me feel, I can appreciate that. In questioning whether or not I should take it down, I asked my Facebook friends to weigh in.

Most of the responses were: "Oh no! I can't believe someone reported that cute picture." But as two friends pointed out, even if you share something to only your friends, people can take screenshots and save them and even misuse them. One of our most sacred jobs as a parent is to protect our kids.

But here's the thing: if someone out there wants to take an innocent picture of a child and use it in a manner I don't even want to think about, that's on them. I'm not about to start supplying pedophiles with pictures of my kids, but the reality is: my kids are on social media, their pictures are found within my articles. In some ways, I've already made the decision to allow their images to be public.

I guess we all have to figure out how we want to handle sharing pictures of our kids with our friends and family. My solution, at the end of a long and fraught evening, was to create a friend list of people I trust to see pictures of my kids. These are people I know in real life, and know well. I didn't include passing acquaintances or people I know through professional networks. When I post pictures of my kids that I wouldn't want the world to see, it's just a matter of choosing the intended audience (in this case, a list of friends I've named "can see pictures of kids") from the dropdown menu on my Facebook. But so far, I honestly don't see that I've shared many pictures that I wouldn't consider safe for public consumption. This may change as my kids get older, or if I feel less comfortable with it, or if I become famous (hey, it could happen).

I'm still hurt that someone reported that picture. But after a couple of hours, Facebook decided the picture did not contain anything obscene. It was nice to get that reassurance, even though I'd already come to that conclusion myself. I chose to include the picture here, because after lots of soul-searching, I decided there is nothing obscene about the picture; and if someone found a picture of me at 2-and-half without a shirt, I wouldn't care who saw it.

What happened to me has made me think about how my choices on social media might affect my children, but right now, I'm still pissed.