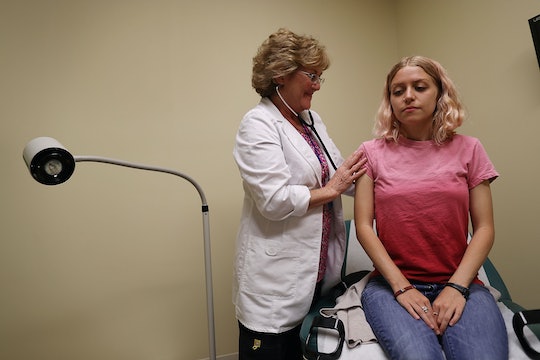 Here's Why Abortion Rates Are Increasing In Texas

In 2011, the Texas legislature passed a bill to eliminate funding for any family planning clinic associated with an abortion provider — even if the clinic itself didn't perform abortions. The bill was meant as a means to defund Planned Parenthood, according to an NPR report, but the true effect reached much further. The bill cut state funding for family planning by two-thirds and closed 82 clinics statewide, only one-third of which were run by Planned Parenthood, NPR reported.

Texas A&M University economics professor Analisa Packham (now at Miami University) conducted a study on what happened in the state in the three years after that funding ended. Peckham found that the adolescent abortion rate rose 3 percent over what it would have been had the state's family planning clinics remained open.

Nearly 2,200 more teens gave birth in the three years following the budget cuts, and those births were concentrated in the state's poorest counties, according to the study.

Peckham also found that abortion rates went up even more in rural areas where state-supported family planning clinics had been, quite literally, the only nearby source for contraception. When the Gregg County federally qualified health center lost nearly 60 percent of its funding, the number of abortions rose from 59 in 2012 to 172 in 2014, according to the Austin-American Statesman.

The connection seems pretty straightforward: family planning clinics offer free or low-cost contraception to teens, as well as education on reproductive health. When you take away those things, the number of unintended pregnancies goes up. And when women live 100 miles or further from the nearest abortion provider, they may turn to other, unsafe options for terminating the pregnancy or be forced to have a child they don't want — or can't afford — to have.

So, as Texas has proven, taking away family planning and education might be a way to rally conservative support, but it isn't the way to actually decrease abortions. As this latest study shows, defunding Planned Parenthood will only make it more difficult for teens to protect themselves — and almost guarantee that they have more abortions and unintended babies as a consequence.