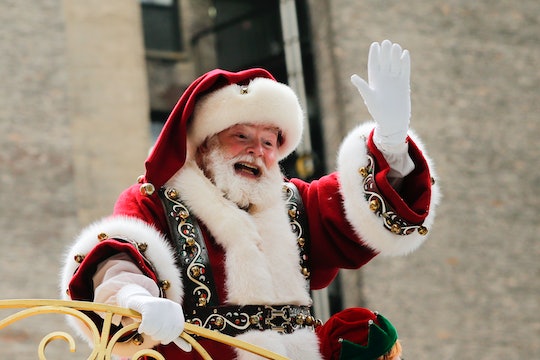 Part of the reason so many people love the holiday season is because of elements that make it colorful. Whether music or lights, decorations or smells, there are certain things that we identify with the season that make it special. But for kids with sensory processing challenges the holiday season can be a minefield, and many parents resort to withdrawing from the hustle and bustle to try and maintain some calm. One program is working to help with that: Soothing Santa is a mall Santa for sensory-challenged kids, so they too can enjoy spending time with the Christmas hero.

The programs, which take place under names like Sensitive Santa, Thoughtful Santa, and Caring Clause, are held at malls across the country and are often in conjunction with Autism Speaks, a research and advocacy organization. The group has helped publicize and facilitate these events since 2011, according to KBUL News. In Billings, Montana, the Rimrock Mall held one event before the mall opened so there were few things to distract children or overload kids sensitive to sights and sounds, the outlet reported.

Most of these events seem to be held in the morning, before stores open, and parents often must make an appointment to attend. Doing so helps children who can’t stand in lines, according to one mother who spoke to the Akron Beacon Journal. “He can’t stand still for two seconds,” she said of her son, who has ADHD. “Having a bunch of noises in the mall, that would be exhausting.”

At Hawthorne Mall in Vernon Hill, Illinois, Soothing Santa is held from 8 a.m. to 9:30 a.m., according to LittleLakeCounty.com, and doesn’t require a reservation. “We keep the lines moving so wait time in line is not long,” the site explained. That mall also offers complimentary refreshments from Maggiano’s following the meet-and-greet with Santa.

Pediatric occupational therapist Heather Reiss explained to the Akron Beacon Journal that for kids with sensory processing issues, a visit to the mall can just be too much stimulation.

“With the sound, overhead music blaring, and the hustle and the bustle, if you are sensitive to sounds and now you’re put in an environment where it’s just amplified, your body is put into a state of alarm. The child who’s screaming isn’t just having a tantrum, but their little systems are on overdrive. It’s so challenging because you want your child to be able to experience those typical traditions. With the Soothing Santa, eliminating the long lines and decreasing the auditory input, that all is helping eliminate one more step that the child doesn’t have to process.”

The New England chapter of Autism Speaks posted a list on its Facebook page of malls holding events. A few of them require registration, but several do not. Autism Speaks also provides a search function on its webpage which returns a variety of sensory-friendly events across the nation. Everything from special performances of The Nutcracker to Sensory Sensitive Sundays at Chuck E. Cheese are listed. It's likely a good idea to check with local autism advocacy organizations and other groups to see if an event is being held in a particular location, just to be sure.

Thanks to creative minds that come up with ideas like these, more children than ever before can enjoy this very special holiday experience.