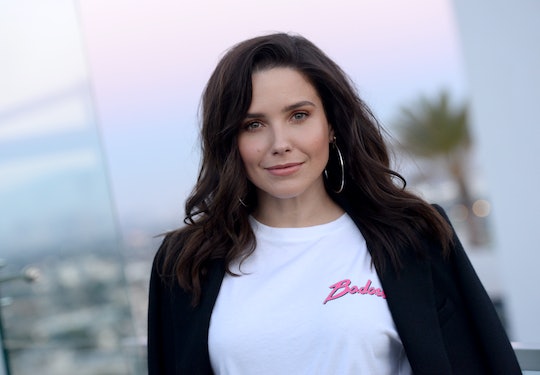 For people of privilege, it's difficult to imagine a scenario in which something as biologically typical as a period, or something as unacceptable as limited access to period products, would keep someone from attending school in the year 2019. But that's the reality for a large number of girls living in the United States, and it's a reality that actress, director, producer, and activist Sophia Bush says is "rage-inducing."

"It’s interesting, for me, to realize that we have this assumption here in the U.S. that that’s something that 'happens elsewhere' or 'happens in another country,'" Bush tells Romper via phone. But a reported one in five girls in the United States have missed school as the result of a lack of access to period products, according to the 2017 Always Confidence & Puberty Wave V1 study. "Having grown up in Los Angeles, to learn that there are 88,000 girls in Los Angeles alone who are facing this issue, I can’t tell you how shocking that feels to me."

Bush, who has been an advocate for over a decade, recently partnered with Always to launch the #EndPeriodPoverty campaign. During the month of September, when many children are heading back to school, Always will donate a pad to the Feeding America network for every pack of Always pads purchased at participating retailers. And for every like or comment on an #EndPeriodPoverty influencer post, Always will donate an additional pad, up to a total donation of 1 million period products.

An estimated 40 million girls and women around the world don't have to wonder what that reality would look like. They're living it. (To say nothing of the trans men who face higher rates of homelessness and who are less likely to have access to period products.) And Bush sees this rampant problem as one that coincides and often feeds into a slew of other issues that disproportionally impact women and other people with uteruses, poor people, and people of color. Whether it's financial insecurity, attacks on access to reproductive health, limited comprehensive sex education, and the prevailing social stigma surrounding periods, the problem of period poverty, to Bush, is one of gender equality and gender parody.

"You see certain political parties going after the health and sovereignty of women, and that’s incredibly dangerous," Bush says. "It’s never just about women’s reproductive rights. It’s never just about birth control coverage. It’s about our ability to govern our experience in our own bodies, from top to bottom."

Periods are still, for some strange reason, taboo, when no one on earth would be here if it weren’t for a period.

Bush says this work is more important in today's political climate. "It's undeniable, the impact of a grown man saying things like, 'Blood coming out of her wherever,'" she says, alluding to then-presidential candidate Donald Trump's comments about then-Fox News host, Megyn Kelly, at a 2015 Republican presidential debate.

"It’s so infantile and embarrassing. You know, the reality is each human has completely natural biology that is not only not a problem, but an incredibly important part of life."

Bush knows that change will require more than just a national dialogue, but she believes it's a necessary start. "I realize that part of the reason this continues to happen is because people are afraid to have the conversation," she says. "Periods are still, for some strange reason, taboo, when no one on earth would be here if it weren’t for a period."

And she hopes that that conversation will not only work to end the stigma and shame associated with menstruation, but help continue to combat the ongoing attack on science, truth, and health care on a legislative level.

"For me, again, all of these issues are incredibly tied together, and it’s one of the reasons why I think it’s incredibly important that we elected so many women to Congress in the midterms, and why we need to continue to do so."

Bush mentions a recent interview Oprah had with former Catholic nun Sister Joan Chittister, who explains, in as many words, "No healthy society can function when people with 50% of the information are making 100% of the decisions."

"I thought it was just a brilliant way to look at representation," Bush continues. "We hold 50% of the information. Period. End of story."

To find out more about Always' mission to #EndPeriodPoverty and keep girls in school, go here.