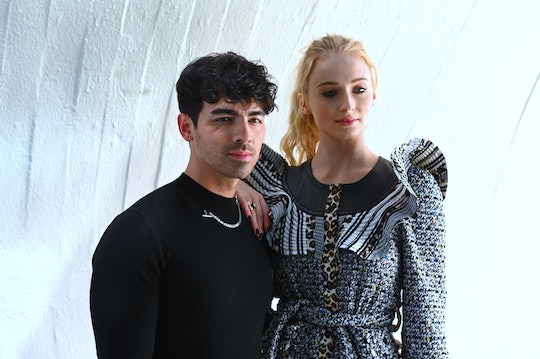 There are some celebrity pairs that just define couple goals. Game of Thrones star, Sophie Turner, and her husband, Joe Jonas, are one of those pairs. While the newlyweds may appear perfect from the outside looking in, they've faced their fair share of ups and downs. Sophie Turner revealed that Joe Jonas got her through a "mentally unwell" period, and fans can't get enough of the sweet story.

The 23-year-old actress revealed that her mental health was suffering at the start of their romance, and Jonas stepped in to support her without hesitation, according to the Sunday Times. Turner said her now-husband told her that he couldn't be with her until she was able to "love" herself. Jonas, 29, said he refused to watch her care more about him than herself. Because of his dedication to supporting Turner, she now credits Jonas with having "saved" her life. She said his ultimatum changed her for the better, and helped get her through a very difficult time in her life.

"I was going through this phase of being very mentally unwell [when we first met in 2016]," the Dark Phoenix star said, according to the Sunday Times. "He was like, 'I can't be with you until you love yourself, I can't see you love me more than you love yourself.'"

"That was something, him doing that. I think he kind of saved my life, in a way."

Turner revealed that while they made it through that period, they did briefly take some time apart. She told the Sunday Times that "cold feet" pushed them apart, but said they got back together not long after. Turner recalled it as the worst day she and Jonas had ever experienced. Fortunately both came to their senses within 24 hours.

"It was the worst day of our lives," she said of the split, according to Sunday Times. "For a second we both had cold feet, then 24 hours later we both were like, 'Never mind.'"

Turner and Jonas recently shocked fans by tying the knot in Vegas, as Us Weekly reported. They were in town for the 2019 Billboard Music Awards on May 1 when they made the decision. Turner, best known for her role as Sansa Stark on Game of Thrones, confirmed the news during the Met Gala. The event was also their first public appearance as husband and wife.

"Camp is, um, hard to define," she said at the time, according to Us Weekly. "Let me give you an example of camp. I think camp is, um, getting married in Vegas last minute after the Billboard Music Awards [because] that would be fun. I'd like to try that. That's camp."

Vegas wedding aside, the pair still intend to jet to France this summer to get married with a big ceremony. According to Us Weekly, the event will be more of a celebration of their relationship than an official wedding since they're already married. Turner and Jonas have been together for close to two years now, one of which they've spent engaged, according to INSIDER.

Fans have come to love Turner and Jonas, and they can't wait to see what's next for them.