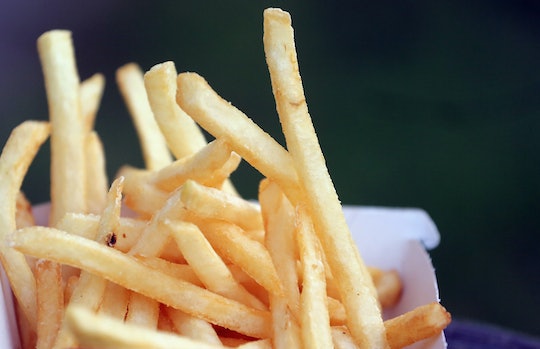 French Fries Are Even Less Healthy Than Previously Thought

French fries are super delicious, but they aren't exactly a super food. But according to a recent study, french fries are even less healthy than previously thought. Which is not great news, since didn't you already think french fries were not so good for you? The study, published in the American Journal of Clinical Nutrition found that people who eat fried potatoes more than twice a week double their risk of early death to a number of illnesses. It's a total bummer.

Luckily, if you prepare potatoes any other way, like baking them, there's no link to early death. So you don't have to give up your spuds completely, just be more conscious about how and when you're chowing down on them.

There's also an upside to the study. Dr. Nicola Veronese, the lead author of the study and a scientist at the National Research Council in Padova, Italy, said that it was an "observational study," which means that they were tracking the behaviors of a group of people over a course of eight years and noted certain trends, but did not claim to make an concrete assumptions. So there's not a direct link between hash browns (yup, those count as fried) and early death yet, since more research would have to be done to make a firm conclusion like that... but it's still troubling.

Veronese said, "Even if it is an observational study, we believe that the cooking oil, rich in trans-fat, is an important factor in explaining mortality in those eating more potatoes." There are other factors though, that can make the french fries worse for you, like obesity, a sedentary lifestyle, or how much salt people are adding that could lead to disease. Yes, trans fats are thought to be "bad" fats since they raise your LDL cholesterol, but it's not all the sacred potato's fault.

Potatoes are actually good for you, when prepared certain ways and in moderation. Naturally, the CEO of the National Potato Council, John Keeling, was not very happy with the study. He told CNN, that potatoes are "inherently" good for people. A medium sized one, he said, has about 110 calories and no sodium, cholesterol, and has more potassium than a banana. There's also a third of the recommended vitamin C in a potato. So it really is about how you cook the spud.

When you cook starchy foods like potatoes, in any way at all, acrylamide is produced. Acrylamide is thought to be toxic to human beings and may cause cancer. You can reduce the amount of acrylamide by boiling or steaming potatoes, but who wants that? If you do fry potatoes, do it quickly. The lighter, the better.

Most people want to eat a healthy diet, but it can be tough sometimes with our budgets and busy schedules. And a french fry now and again isn't going to do irreparable damage. It's all about balancing your family's diet and activities. French fries are way too delicious to pass up completely anyway.