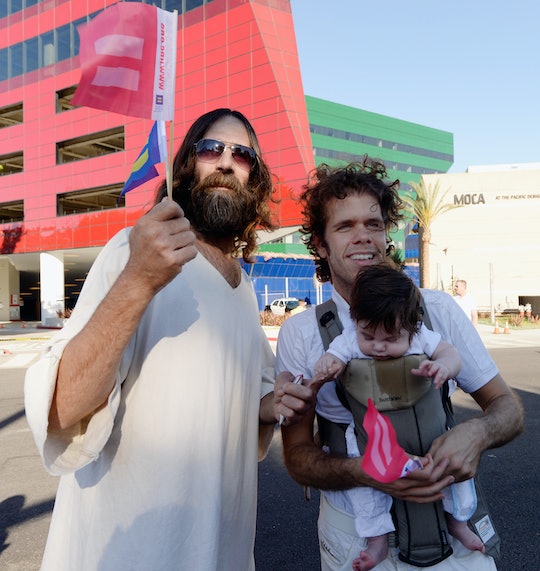 Being a parent, I want to protect my children from anything harmful or painful in the world. I want things to be easier for them than they have been for me, but I'm aware that no matter what I wish for them, or attempt to keep them from, they will grow into their own people, with their own identities. I know this because my parents attempted to funnel me toward certain outcomes, and even though they gave it their best efforts, I ended up being the person they least wanted me to be. Eventually, they realized that the person I am is who I was meant to be all along. Understanding and supporting who your children are is your one real job as a parent. That's why Perez Hilton's comment that he would "prefer" his son was not gay — for his son's own good — is so disappointing, and yet tragically understandable.

In a YouTube video posted to his own site, and filed under the tag "Gay Gay Gay," Perez Hilton elaborated on comments first made in his podcast, explaining that he wanted to keep his 5-year-old son out of dance class lest he grow up to be a homosexual, because life as an LGBTQ individual is harder. "Being a gay man, or even a gay woman or a transgender man or a transgender woman in America and around the world is still a harder road to travel on. We are still discriminated against, and I don’t want my son [or daughters] to have a harder path in life,” he told the camera. All in all, the video has a lot to unpack. I was taken aback — for many reasons. But the key issue is that this kind of thinking will not save our kids from a world that doesn't accept who they are — it will reinforce that thinking.

I know that I can't actually mold them into what I consider to be a 'safe' identity.

I was surprised, watching it, because Hilton is a gay man who has always presented himself as a person who is proud of his identity, of his sexuality. I was surprised because by expressing the belief that dance class *makes someone gay,* he was feeding into the idea that masculinity cannot be "true" masculinity unless it exists in a certain environment — dance class not being one of them.

Futher, and I cannot believe I have to say this, but boys can dance without it influencing their sexuality. Boys can be straight, gay, and bi, while dancing. There is no one way to be a person, though society would have you believe that there is one way to be masculine. And Hilton believes that by keeping his son from a sport that is considered less masculine, he is also keep his son from being gay. In clarifying his original comments in the video, he said, "Just like I don't think it's a homophobic thing to say that a disproportionate amount of male singer/actor/dancers on Broadway are gay," as the Daily Mail reports.

As a queer, non-binary, black parent, part of me understands the wish for your child to choose the easier path. I know I wish my children wouldn't have to encounter racist people, or people who will mock them for who their parent is, but the truth is I know that I can't actually mold them into what I consider to be a "safe" identity. And because of how I identify, I want my children to find the freedom in knowing themselves. I want so badly for them to experience the growth and joy that comes with being able to look yourself in the mirror and say: "THIS IS WHO I AM." As a parent, that is what I want the most for my children.

It's so easy to feel like we can save our children from our own experiences — create a perfect do-over in their lives — but I wonder if we let our fears of what the world holds for our kids keep us from encouraging them to be who they're meant to be. Creating space for self-discovery by offering a diversity of activities and role models won't lead kids down a dark path they wouldn't have found; it will simply make it easier for kids who wouldn't otherwise have felt like their identity was a valid option.

Masculinity can exist within queerness, within environments that are women-led. Masculinity is actually apart of everything we do as a society.

Hilton looks like a loving dad, and I believe his intentions here. In 2010, he vowed on Ellen that he would no longer bully celebrities (a sample of his work), working to be a positive rather than negative force. He cited efforts to reduce teen suicide at the time as part of the reason, per MTV.

But the comments he made in this video only reinforce a culture of toxic masculinity. Why do we want our sons to show strength, but only the strength that comes from pushing down feelings and emotions; the strength that comes when they participate in a sport with other men and make forceful contact with their bodies; the "strength" that we don't expect our daughters to have or hold. This is toxic masculinity: when we fear having soft boys, when we make fun of them for wanting to dance, when we mock them for crying instead of sucking it up, when we say "be a man," and when we say "you run like a girl."

Masculinity isn't synonymous with straightness, of course, though we often attempt to make it so. Masculinity can exist within queerness, within environments that are women-led. Masculinity is a part of everything we do as a society. But the ones who are forced to take it on as an identity the most are boys, young boys, in order to fit in, to be good enough. Even well-meaning comments by parents about your identity can feed into it — subtle cues that you are deviating from the norm, showing the wrong behavior.

I think as parents we all make mistakes. We all cultivate certain ideas and beliefs on how to raise our children, and we need room to revise and reconsider those beliefs. So while I disagree with Hilton and what he wants to keep from his child, I also believe that he'll learn that even if he put his child into every activity to make him "straight," that's not how it works.

He should know this better than anyone.