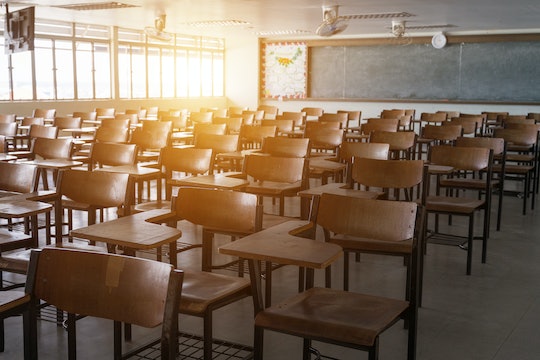 As students across the country return to school, both parents and children are re-familiarizing themselves with various school policies, like dress codes. And not everyone is happy with what they've found. Frustrated by what they've deemed to be "unrealistic" and "unfair" regulations regarding students' clothing, some South Carolina parents have petitioned the school dress code enforced by the Fort Mill School District.

More than 5,000 people have signed a Change.org petition urging the Fort Mill School District in South Carolina to replace its current student dress code with one based on input from parents, students, and advisory boards dedicated to the issue. Started by "Parents in the Fort Mill School District," the petition seeks a "fair" and "realistic" dress code policy that ultimately "gives students freedom from stress and anxiety and empowers our daughters and sons to learn and feel safe and comfortable at school."

The parents behind the petition argue that the guidelines within the school districts' current dress code are "unrealistic, arbitrarily enforced, and unfair," especially for female students. They cite examples like the district's regulation prohibiting tank tops and sleeveless tops and rules mandating skirts, dresses and shorts (these items can be be no higher than 4 inches above the crease of the knee) as evidence the policy leaves female students in particular with few options for comfortable clothing in the hotter months, according to WBTV. What's more? They claim the policy holds students to outdated rules that even members of the school board don't abide.

"Sleeveless style dresses and blouses are common in corporate America, not distracting and would provide girls with more comfortable dress options," the petition reads. "Our own school board members often times wear sleeveless dresses during school visits and board meetings."

In a statement to Romper, a spokesperson for the Fort Mill School District refuted claims that their dress code singled out female students.

"With students transitioning from one school level to the next and our rapid growth rate we understand some students may be adjusting to a different dress code policy than they previously adhered to," the spokesperson said. "Our district policy was last modified in 2017 and is in line with the majority of non-uniform dress code policies across our state. The policy is also designed to be gender neutral and is applied equally to males and females."

Still, parents behind the petition argue that the dress code guidelines have made their daughters "feel forced to wear long pants and jeans" in 90 to 100 degree temperatures in order to avoid the embarrassment and penalty that comes along with receiving a dress code violation. "Not only does this present health risks, such as nausea, overheating and even fainting, but it promotes victim blaming and negative or distorted body imaging and makes our daughters feel less empowered during an age when they are already emotionally vulnerable," the petition reads.

Furthermore, the petition argues the school district's dress code sends male students the wrong message. "Our sons should not be sent the message that the adults around them feel they are incapable of treating all females with respect, that they are unable to control themselves nor that a female’s attire is a license for distraction or to act inappropriately," it reads.

Fort Mill School District parent Mindy Neal told The Herald her 13-year-old daughter had allegedly been pulled out of her eighth grade class for dress code violations twice within the first three days of school. As a result, she missed class as the school supposedly made her wait in an office until her parents could bring clothing for her to change into. According to Neal, the first violation was due to her daughter's shirt reportedly not being long enough for the leggings she had paired it with, even though those leggings were opaque. The second violation was a result of her daughter's yoga pants, also opaque, failing to meet the school's dress code.

As part of its policy on student dress, the Fort Mill School District mandates that "students will dress in appropriate attire" and that "the administration reserves the right to determine what is appropriate for school."

Frustrated, Neal reached out to other parents in the district and heard similar stories of alleged missed class time, arbitrary enforcement, and inconsistent guidelines. "We all decided enough was enough," Neal said of the parents' decision to start the petition, as The Herald reported. She's hopeful it will give parents and students a voice and lead to the implementation of a dress code that is supposedly more fair.

Although it's unclear if the petition will be successful, the Fort Mill School District appears to be willing to listen to parents' concerns. A spokesperson for the Fort Mill School District tells Romper the district is "currently reviewing our policy and its implementation to ensure the policy is being applied consistently across all grade levels" in light of the petition.

"If a student or parent has a concern regarding the dress code or its implementation they should contact their principal to share the concern," the spokesperson says. "We welcome all feedback from our community and will continue to make adjustments as warranted."

No matter where you stand on this issue, it's great to see parents and school officials working together to find an appropriate solution to this problem.