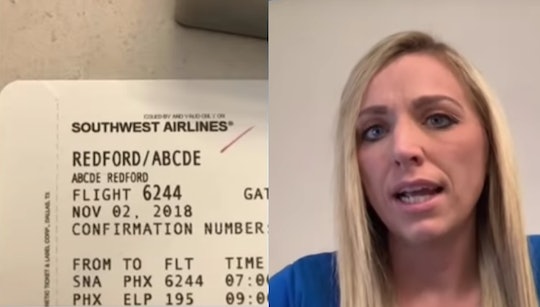 Naming a child is never easy and all parents take different approaches to the task. Some like to stick to the tried and true "most popular baby name" lists, while others prefer unique names that will set their kids apart from the crowd. One Texas mom, however, said she experienced some less-than-kind reactions to her name choice. And this week, Southwest apologized after she claimed a gate agent "mocked" her 5-year-old daughter's name, according to ABC 7 News.

Traci Redford told the news outlet she was flying out of Orange County, California's John Wayne Airport back home to El Paso, Texas, when she said a boarding agent was allegedly "laughing, pointing at [her] and my daughter," Abcde, which is pronounced "ab-city."

Redford told ABC 7 News that she asked the agent to stop, because both she and her daughter could hear what she was saying, but it turns out that wasn't the end of the story. Redford also told the news outlet she later learned that the agent had allegedly taken a photo of the little girl's boarding pass and posted it to Facebook.

In a statement, Southwest Airlines issued an apology to the Redford family. "We take great pride in extending our Southwest Hospitality to all of our Customers, which includes living by the Golden Rule and treating every individual with respect, in person or online," Southwest said in a statement to Romper. "The post is not indicative of the care, respect, and civility we expect from all of our Employees."

Southwest added that while the airline "[does] not disclose personnel actions publicly," the company is "using this as an opportunity to reinforce [Southwest's] policies and emphasize their expectations for all Employees."

While Southwest issued an apology this week, Redford told ABC 7 News that she'd filed a formal complaint with the airline following the alleged incident, but that "after two weeks ... Southwest hadn't done anything."

As far as baby names go, Abcde is definitely unique. According to HuffPost, the Social Security Administration’s database of popular baby names states that "Abcde is not in the top 1000 names for any year of birth beginning with 2000." Though in a 2014 article, Vocativ noted that, actually, 328 babies have been named Abcde in the United States, and in 2009, there were 32 Abcdes born that year, an all-time high for the name. In fact, in December 2014, a little girl from California named Abcde also made headlines, after she was reportedly turned away from meeting a mall Santa due to concerns over her autism service dog, who was a pit bull, according to CNN.

The Southwest Airlines story has resulted in some pretty divided reactions, with some condemning the agent and others continuing to snicker at the child's name. But for Redford, the incident was mostly just a disappointing reminder that sometimes, people can just be mean. Redford told ABC 7 News that she ultimately just told Abcde, "not everyone is nice and not everyone is going to be nice and it's unfortunate."

Regardless of your take on the name, hopefully Abcde will be able to grow up feeling proud of her unique moniker, even if not everyone is on board.