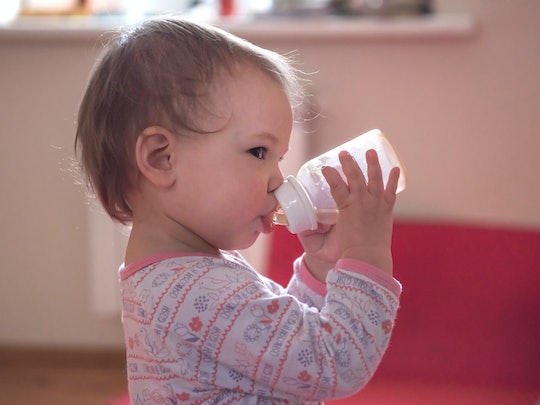 When I was officially diagnosed with polycystic ovary syndrome years ago, I looked for ways to treat the condition naturally, in addition to taking birth control. And one suggestion stood out: Stop eating soy-based foods. It turns out, soy disrupts the endocrine system, which could explain why new research has shown that soy formula feeding could lead to severe menstrual pain later in life.

A new study published in the journal Human Reproduction found that babies who are given soy-based formula have an increased risk of experiencing moderate to severe discomfort during menstruation, as well as heavy bleeding, in adulthood, according to the U.S. National Institutes of Health (NIH). Specifically, researchers analyzed data from more than 1,550 Black women, aged 23 to 35, and discovered that women fed soy formula in infancy were 50 percent more likely to develop menstrual discomfort between 18 and 22 years old, and 40 percent more likely to use hormonal birth control to treat the symptoms, NIH reported. The data informing the study was taken from the National Institutes of Environmental Health Sciences (NIEHS) Study of Environment, Lifestyle, and Fibroids (SELF).

In addition to menstrual pain, the research team found a link between soy formula and increased incidences of endometriosis, according to the study's findings. Women with uterine myomas are also more likely to have larger fibroids if they were given soy-based formula as children.

This is not the first time research has found a link between soy formula and menstrual discomfort. A 2001 study published in JAMA also discovered that exposure to soy formula as an infant could lead to severe menstrual pain as a young adult, as well as longer periods of menstrual bleeding.

It's important to note, though, that the association between menstrual pain and soy formula is not because of infant formula itself, but rather what it is made from: Soy. And that's not surprising when you consider a large body of research has long documented the ill effects of soy on the endocrine system.

Soy is considered an endocrine disruptor, which means it could interfere with the reproductive system's development. That's because soy contains isoflavones, plant compounds that mimic estrogen, and act as "imposters" of naturally-occurring hormones. In turn, the chemicals may not only disrupt hormone production, but also change the chemical message sent by hormones, as well as block hormone behavior, according the Emory University School of Medicine's Department of Pediatrics.

Animal studies have found that genistein, the primary isoflavone in soy, could trigger early puberty, decrease fertility, and effect fetal development, according to Scientific American. And, in addition to severe menstrual pain, the hormone-disrupting chemical may also lead to endocrine conditions, such as PCOS or endometriosis, Scientific American reported.

Although there is enough evidence to suggest that soy could be harmful to the endocrine system, the team behind the Human Reproduction study do recognize that more research is needed in the long-term effects of soy-based formula, according to NIH. There's not enough information, at the moment, for the American Academy of Pediatrics to change its recommendations on soy formula feeding, NIH reported. The AAP recommends soy only in cases where the family adheres to a vegetarian diet, or the baby cannot break down the sugars in milk.

Still, if possible, it's worth looking into alternatives to soy-based formula for your child. If you are worried about soy's impact on your infant later in life, speak to your doctor about other feeding options.

More Like This
Gov. Abbott & Other Republicans Condemned President Biden For Feeding Immigrant Babies
Spain Could Offer Up To 5 Days Of Menstrual Leave A Month & It'd Be A Game Changer
It's Not Just Covid: Doctors On Why Everyone's Getting Sick Right Now
Here’s What You Need To Know About That Viral 1960s Baby Formula “Recipe”