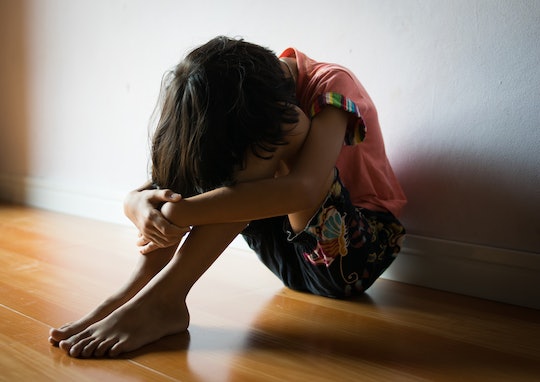 Spanking Kids Could Have A Devastating Impact On Their Future Mental Health, Study Says

Spanking is one of those hot-button parenting topics that can ignite a social media debate in a matter of minutes. How parents choose to discipline their children is a very personal decision, but research into certain methods has revealed that these choices could have lasting consequences. For example, spanking children can have a devastating impact on their mental health later in life, according to a new study.

The recent study out of the University of Michigan found that the type of violence involved in spanking can lead kids to feel depressed, attempt suicide, or struggle with drinking or drug use as they get older, according to a press release published by Science Daily.

Andrew Grogan-Kaylor and Shawna Lee, associate professors of social work at the university who worked on the study, explained that spanking is comparable to other forms of abuse, and considering it as such might help spread awareness about the harm spanking can do. "Placing spanking in a similar category to physical/emotional abuse experiences would increase our understanding of these adult mental health problems," Grogan-Kaylor said in the press release.

For the purpose of this study, spanking is defined by Science Daily as "using physical force with the intention of causing a child to experience pain, but not injury, to correct or control the youth's behavior." Researchers make the connection between physical abuse and spanking because both involve using force and inflicting pain.

Additionally, the two have been linked with similar mental health issues down the line. For these reasons, there's the question of whether spanking should then be classified as an adverse childhood experience — a category including abuse, neglect, divorce, and other traumatic events during childhood.

The study examined data from more than 8,300 people, ranging from 19 to 97 years of age. These participants originally completed self-reports for another study, the CDC-Kaiser ACE study, while being treated at an outpatient clinic for routine health checks. Their reports included questions on how often they were spanked as children, their home life, and any incidents of abuse — both physical (pushing, grabbing, shoving, and slapping) and emotional (insulting or cursing).

Nearly 55 percent of the participants reported spanking as a form of discipline from their childhood, according to The Kansas City Star, with men and minority respondents (aside from Asians) being spanked the most. Those who were spanked had a higher likelihood of depression and other mental health issues, the research found. Lee explained to Science Daily that, for these reasons, harsh parenting needs to be prevented:

This can be achieved by promoting evidence-based parenting programs and policies designed to prevent early adversities, and associated risk factors. Prevention should be a critical direction for public health initiatives to take.

This isn't the first study to reveal the harmful effects of spanking on children's mental health. Along with Grogan-Kaylor, developmental psychologist Elizabeth Gershoff conducted a meta analysis published last year of roughly 161,000 children, spanning over 50 years, that linked spanking with negative outcomes such as increased aggression, anti-social behavior, and mental health and cognitive issues, according to Vox.

Despite the known harm associated with spanking, it remains fairly common in the United States. A 2015 survey by the Pew Research Center found that 45 percent of American parents have spanked their children at some point. Even more alarming, the Chicago Tribune reported that about 80 percent of children worldwide are spanked or otherwise physically disciplined. Gershoff explained to Vox that this prevalence likely spawns from religious beliefs, misconception of success created by an immediate reaction from the child (read: "crying), or parents who were spanked as children themselves. She told Vox that spanking teaches children to resort to violence to get their way:

It might be a mild form, but spanking is a form of violence. The violence changes the relationship. It changes the power dynamic, and makes it clear to the children that you can hit somebody if you have power.

I am not here to tell anyone how to raise their children, but the evidence is pretty clear. Spanking can be a slippery slope with serious outcomes. What's more, according to Vox, is Gershoff's analysis from last year found that spanking doesn't even work as an effective form of punishment, so why bother? There's not one perfect way to discipline a child, but learning how certain methods can impact children now and later in life is worth considering.